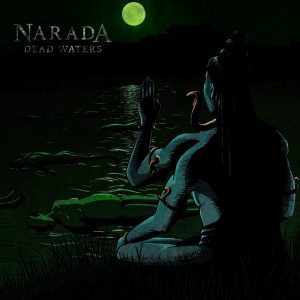 Released on October 1, 2014 via Bandcamp

Lately it seems that Russia just hates death metal. But mostly Cannibal Corpse. They’ve been denied a recent tour there plus their artwork and lyrics have been banned (for a variety of reasons that can basically be boiled down to paranoia and preconceived notions). It’s as though the Russian government has only heard of one band in the death metal genre. Apparently they are blissfully unaware of the current death metal scene in their own country (or are just a bunch of wimps when it comes to gore).

Narada are one of the latest acts out of St. Petersburg. A technical death metal extravaganza that have only this single release to their name. No demo to speak of (that I’ve been able to find). Perhaps the time spent perfecting demo pieces was simply scrapped until they could unleash their first full-length Dead Waters.

At once savage and at another melodic, Narada are a band that’s going to draw a lot of comparisons to heavyweights in the death metal genre. Not the least of which, more recent Behemoth and Nile. Narada are a band of shifting tendencies, as the technical aspect oft follows. The marriage of aggression, jumping spats, and melody are old hat. However, Narada play the game like they’re already PhDs genre-heads.

When a band can crack open an album with a track like ‘From Zenith To Nadir’, they’re doing a lot right. The sweeping six-minute blaster is riddled with expert musicianship. From the eerie intro, complete with wailing leads, until the immediate blast of business that Narada smears all over the speakers, it’s a track that never showcases a section of boredom or lack of inspiration. Instead of repeating a lot of rhythms and riffs, the band simply moves on from where they were as the song kicks forth. It slows down, it chugs, it speeds up but it never loses momentum. It’s a near perfect introduction.

The production walks a fine line between raw and clean. The album never sounds so rough that it’s like they recorded in a tin can in the dead of winter, but it also never falls onto the dangerous route of vanilla. Dead Waters is a bombarding experience. Tracks like ‘Universal’ pure shots of adrenaline that barely relent. The pinch harmonic guitar riffs and thundering drums are simply frothing. It never loses momentum. Even when repeating itself, it still manages to be fresh.

The band’s love for death metal both recent and classic really shines through in their sound. Sometimes they can sound as frantic as Cryptospy (see: ‘Cadavers In The Pit’). A later riff in ‘Chikkhai Bardo’ sounds a little Chuck Schuldiner-esque (I’d give it Human-era status). But perhaps the most interesting riff is the intro to ‘Sons Of Kashyapu And Kadru’, which sounds straight like it’s off an Opeth record. A beautiful little progression that quickly escalates into a technical gargle of double-bass punches and groovy guitar riffs. Hell, the clean lead even sounds a little Dillinger Escape Plan.

But I make too many comparisons. Narada are a band that deserves to be heard on their own merit. They have honed an incredible grip on technical death metal and unleashed a slew of banging tunes. Dead Waters is one of those Bandcamp gems that crops up every so often. An album that is miles above its peers. It deserves recognition, just not from the Russian government. But from you? Absolutely. Dead Waters is an album brimming with life. Narada are a band to keep an eye on.