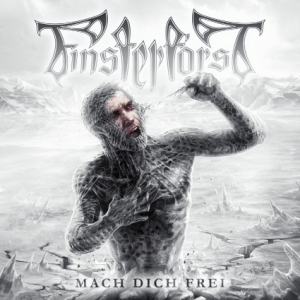 Released on January 23, 2015 via Napalm Records

Finsterforst are back with their fourth album Mach Dich Frei. The album follows on nicely from their previous album Rastlos, which was their debut album on Napalm Records. Mach Dich Frei takes on the same formula as Rastlos, which is not a negative as it takes that formula and adds to it, to create another epic album that again pushes the boundaries of folk and pagan metal. The vocals are in German, which mean I cannot understand the lyrics, but again this is not an issue as the music more than makes it up for it.

The album opens up with the usual atmospheric track that eases you into the album before the guitars for the second track, ‘Schicksals End’, start. The track starts of slowly with plenty of sustain on the guitars before the track opens out into a fourteen minute epic, that features plenty of tempo changes, additional horn and chorus sections and other subtle music changes that all work well within the track as it builds to its conclusion.

The next track ‘Zeit Fur Hass’ is only slightly less epic at ten minutes long, before we get a breakdown track that slows things down. This leads onto the title track that is also the first single released from the album. This and the next track follow the now familiar pattern of long epic tracks that have enough about them so as they do not overstay their welcome. The penultimate track ‘Reise zum..’ slows things down again and is basically an introduction to the album’s closing track, named ‘Finterforst’, and is very much like ‘Flammenrausch’ from Rastlos in that it is a twenty minutes plus song that takes all the elements from the album and moulds them into one epic track.

Mach Dich Frei is an album that fans will be familiar with and enjoy, and if you have not heard them before, but enjoy your music big and epic, you owe it to yourself to have a listen to what is an excellent album.