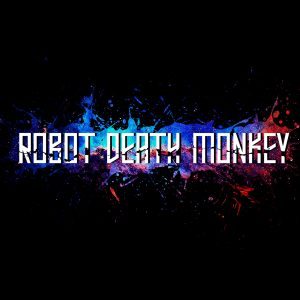 Released on October 17, 2014 via Independent

Robot Death Monkey is a four man stoner/sludge band from Edinburgh/Newcastle that was formed in 2010 by brothers Shaun and Sam Forshaw. Shaun provides the authentic gritty stoner vocals while playing a sweet looking purple Rickenbacker bass. Sam plays drums and completing the current line up are Alan Travers and Tom Newell both on guitar.

This is their first EP Full Dunham, which was recorded and mixed by drummer Sam and has seven stoner/sludge tracks that mostly come in around the three minute mark making this a value for money EP. With interests in beards, bourbon and big muffs, plus influences from Karma to Burn, Earthless and Kyuss, Robot Death Monkey have established the stoner rock/sludge vibe to great effect on their Full Dunham EP.

Most of the tracks are driven hard and heavy keeping up a groove tempo that will keep you trucking. Especially the opening track ‘HGV’, which is one of four vocal tracks the others being ‘Two hands two drinks, ‘Ten Pound Banger’, ‘Crowhill Woman’ and ‘Shadow Of The Mountain’.

All the tracks above have heavy bass and rock/blues guitar riffs with real gritty vocals from Shaun. The two instrumental tracks with the most inventive names I have read for a while are ‘Magpie & Gobbler’ and ‘Dragon Clit’. Both tracks are excellent and my highlights on this EP and that’s not intended to take anything away from Shaun’s vocals. They are both powerful songs that were made for each other and are full of phych/sludge guitar riffs playing alongside a bouncing bass line and fast pounding drums. Everything you could want from a stoner/sludge EP. The track ‘Dragon Clit’, which conjures up images that are just plain wrong, is also on video and well worth checking out.

I have seen Robot Death Monkey live and really enjoyed their set. They are a vibrant young band that should rise through the ranks to headline status, but with so many really good bands out there it will be hard work. So keep an eye out for them, give them your support and enjoy their show and remember two hands, two drinks!