(((O))) : Winds of Genocide – Usurping the Throne of Disease 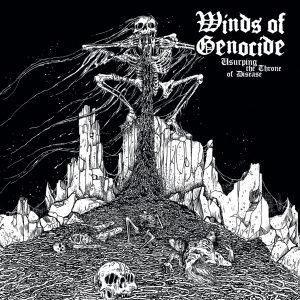 Released on January 22, 2015 via Pulverised Records

Opener ‘The Howling Wolves Of Armageddon’ doesn’t fuck about, a punked-up ripper of a track that sees vokillist Kat Shevil Gillham litter her throat-shredding performance with plenty of “UGH“s. Following track ‘Deathstrike Of The Scythe’ keeps up the breakneck momentum, with some impressive stop-start blasts from drummer Ian Hunter, and a squalling solo from guitarist Glynn Hall.

There’s not much in the way of variety throughout the tracks, but there are enough standout moments within each to set them apart, like the buzzsaw riff straight from the Sunlight days in ‘Venomous Warfare’, and the insane drum fills throughout ‘Mass Graves Of The Innocent’. The brilliantly-titled ‘Swathed By The Black Wings Of Death’ closes things out with a chaotic blackened crust attack, chock full of frostbitten tremolo, blastbeats, and some of Kat’s nastiest vocal work yet.

The appropriately unpolished production of the album (courtesy of the legendary Fred Etsby’s mix, and mastering from Jack Control at Enormous Door) harkens back to the glory days when crust punk and metal were damn near indistinguishable, when you could go see Bolt Thrower play with Axegrinder or Deviated Instinct, or stick an Amebix bootleg on the other side of your dubbed Nihilist demo. I’m a bit too young to remember those days myself, so this album is probably as close as I’m gonna get.

Drawing from elements of straight-ahead punk, d-beat, black and death metal, Usurping the Throne of Disease manages to sound both like a lost gem from an age gone by, as well as proving there’s life in the rotten corpse of those genres yet.

Crack open a tin of cider and get this played loud as fuck.