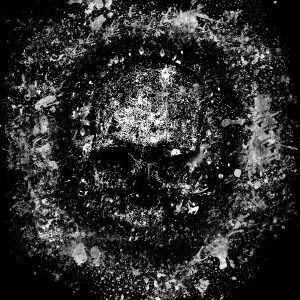 Released on December 23, 2014 via Independent

Released at the very end of 2014, the double EP by Edinburgh, Scotland’s Godhole is a release that fits in well with their contemporaries. A band of aggressive, brash riffage, and a monstrously raw sound. Though seemingly more credited as a powerviolence band, Godhole shows tendencies more akin to the grindcore genre, with a crusty black metal influence.

At least for one half of the double EP, more on that later.

Side A is where it all begins. The ugliness, the rage, the seething, dissonant vocals of Jamie Christ (also the band’s guitarist). The band whips in and out of powerful riff after powerful riff with only minor breakdowns. Though recorded at the Broken Drum Studio, Side A sounds like claustrophobic garage piece. It has a tendency to feel tight and at odds with the other instruments. The drums, especially during the melodic section of ‘Diamond Scar’, feel like they’re mixed a little lower. However, it gives the album a raw, pulpy feel that brings out the ugliness that these genres are known for.

And while the ugliness is ripe with rot and ruin throughout, there are also odd moments when the music is actually relaxing, even soothing. As a double EP, what Godhole gives us is two things plastered together, but they’re variants on each other. Odd entities that don’t mirror each other but are still cut in the same vein. One may recall when powerviolence masters Iron Lung packaged the CD version of White Glove Test with a basic version, noise track, and a merged version. Don’t expect to get something like that with the Side B pieces here.

Godhole allows themselves to give headlong into the proverbial rabbit hole and go ape with their production ideas and approaches to songs. It’s not even a variation so much as the Side B pieces are re imaginings. From the industrial waves of pieces like ‘Eternal Poisonous’ to the relaxed soundscapes of ‘Diamond Scar’, and even the Merzbow Pulse Demon-inspired slash of ‘Ruby Bizarre’ and ‘Never-Healing Gold’, the band exercises an incredible breadth of range. Side B could be easily summarized as an experiment in industrial ambiance and noise. A veritable feast for the ears.

I find myself torn as to which side of these offerings is actually better. When Godhole experiment, they have a way of pulling in the listener and soothing the scalp just as easily as they can shake the bones. A terrifying amount of control is displayed within. Though for those wanting all the rage, Side A serves up some seething riffs. Perhaps in the future Godhole will fuse these talents together and really destroy some speakers. For a band just starting out, this is a pretty damn devastating release.

It should also be noted that this project, specifically this double offering, is also the result of Christ’s younger brother’s unfortunate suicide. If you buy this on Bandcamp, all proceeds go to the Scottish Association of Mental Health.