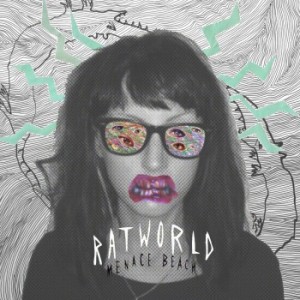 Released on January 19, 2015 via Memphis Industries

Can a truly derivative album ever be considered great? Or, to rephrase the question, is innovation or originality a fundamental requirement in new music? It’s possibly a question best pondered late at night when the party is slowly dying, but it’s a question asked of the listener throughout this debut album from Leeds alt-rock shoegazers Menace Beach, and the answer is… yes, an album can be great, despite an apparent lack of originality.

It’s easy to perhaps dismiss the genuinely good song-writing and perfectly composed pop melodies on Ratworld by looking at the fact that the album sounds like it was made some time in 1992. Don’t. This is an album that demands repeated listening. Loudly. Possibly while singing along.

The band consists of Ryan Needham and Liza Violet along with the help of various players in the Leeds scene. The pair share vocal duties, which only adds to the number of bands referenced throughout. It’s like a collage of alternative rock – there’s Sonic Youth, there’s My Bloody Valentine, the Vaselines, Slowdive… And it is brimming with the energy of youth.

From the lunging guitars and glorious harmonies of opener ‘Come On Give Up’ to the vicious “Fuck everything you ever wanted to be” it’s a statement, musically and politically. The question it leaves unanswered is whether the attitude itself is as derivative as the music. That’s possibly being cruel though as the album is exuberant throughout, and in ‘Tastes Like Medicine’ Menace Beach have released one of the best tracks of the year (okay, so it’s only January, but still). It’s a fast-tempo alt-pop masterpiece with Needham’s lead vocal a driving force while the backing vocals from Violet lift the track to another level of wonderful. The pair have great chemistry and having co-written the album, it’s hard not to compare them Eugene Kelly and Francis McKee from The Vaselines. “But I say a lot of things / and you say, baby I know / it tastes like medicine / and we go on,” runs the chorus, each syllable bursting with energy.

Fuzzy guitars, drums mixed high and low-slung basslines are the backdrop to the hugely infectious melodies across the album. ‘Blue Eye’ changes direction a little with Violet providing a classic dream-pop vocal performance as the pace slows.

Produced by Hookworms’ MJ Johnstone, he does a great job of allowing the natural chemistry between Needham and Violet to shine. Already getting steady airplay, 2015 is looking pretty good for Menace Beach – almost as good as 1992.