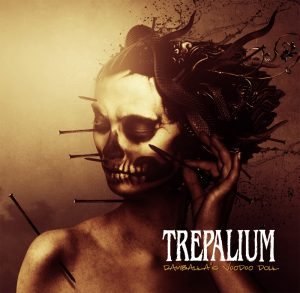 Released on February 9, 2015 via Klonosphere

Trepalium are a French death metal band who decided that they needed to jazz things up for their fifth studio release. Damballa’s Voodoo Doll is a six song EP, which was recorded with a jazz band to combine some classic New Orleans jazz with modern French death metal.

The opening track opens up with a beer being opened amongst a rowdy crowd, before the jazz band starts up taking the listener back in time, before a rift opens up in space and out comes Trepalium taking us back to the modern day. ‘Moonshine Limbo’ combines heavy riffs and jazz rhythms to great effect, while occasionally the metal takes a back seat as the jazz band take centre stage.

The next track ‘Damballa’s Voodoo Doll’ is much more metal in sound than the first track with the jazz band taking a backseat on this one, appearing only when needed. ‘Possessed by the Nightlife’ brings us back to New Orleans as we hear someone playing the piano in another bar before we get a sound effect that leads into Trepalium starting up for a song that again combines heavy riffs and jazz rhythms, with spoken versus that lead into growling vocals.