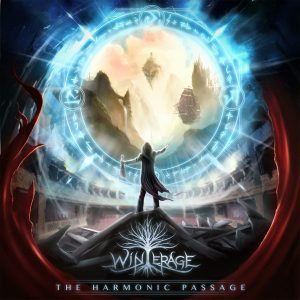 Released on February 2, 2015 via Nadir Music

The Harmonic Passage is the debut album from the Italian symphonic power metal band Winterage. The recording was done with a full scale orchestra along with chorus groups. The band was formed in 2008 by violinist by Gabriele Boschi and keyboardist Dario Gisotti, and by 2010 they had formed a band and began producing their first EP, which was released in 2011. The EP showed what was to come with its mixture of soaring synths, violins and chorus groups with power metal. In 2012 they released a single ‘Forest of Consciousness’, which was used in a local horror movie.

The album starts with ‘Overture in Do Minore’, which is a classic style orchestral instrumental, before we get bagpipes and a chorus group. This sets the tone for what you are about to hear during the rest of the album as the orchestral arrangements and choruses feature all the way through the album just with added power metal.

The title track is next and the metal elements begin straight away along with the chorus as the track builds up to the vocals, which are your typical power metal fare. ‘The Harmonic Passage’ is probably the heaviest track as the orchestral elements are lower in the mix as the guitars and drums take a greater role, than they will for the rest of the album. The track closes though with the orchestra and violin and signals the start of the epic theatrical tracks that are about to follow.

This begins with the next track ‘The Flame Shall not Fade’, with intricate orchestral arrangements, booming choruses and occasionally the power metal element breaks out before we settle into the more theatrical element. It’s theatre for your ears, as the music takes you on a magically journey.

Each track has its own story to tell with its own sound and occasionally you’ll get a guitar solo or drum rolls to remind you that you are listening to a metal album and not just a theatre production releasing their soundtrack. The album is a joy to listen to though it is epic and fun and worth a listen.