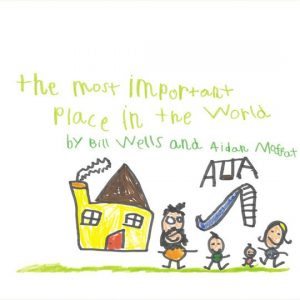 Released on March 16, 2015 via Chemikal Underground

The last time troubadour of the miserable, Aidan Moffat teamed up with jazz pianist Bill Wells, the result was a stunning, innovative album, which went on to win the inaugural Scottish Album of the Year prize (a colloquial Mercury that celebrates all aspects of pioneering Scottish music).

That was in 2011. Thankfully the pair have seen their way to team up again and the result is possibly even better. From the discordant ‘Lock up the Lambs’ to the gospel-tinged ‘Street Pastor Colloquy, 3AM’, the pair hit the mark every time – even the bossa nova of ‘Any Other Mirror’ comes good against the odds handed out when its Casio keyboard beat starts up.

The album title, The Most Important Place in the World is taken from an Ikea slogan and its cover was drawn by Moffat’s six year-old son, but this playful cheeriness doesn’t translate to the 12 tracks contained therein. Sex is a key theme – as it is in most of Moffat’s output, and from opening track ‘On the Motorway’, it is again prevalent, though this album is a soliloquy to the city, a love affair of a different kind.

It starts with a car indicator, which keeps beat throughout, while Wells’ melancholic piano sets the mood perfectly.“I dreamed that we’d lifted off / like Danny and Sandy from greased lightning / soaring somewhere cloudless / with a tank full of hope and a trunk full of plans.”

As a lyricist, Moffat is pretty much untouchable. Poignant, heartfelt and filthy; he’s an alternative national treasure, and in Wells he’s found a musician who can channel his story, creating piano-driven arrangements in perfect harmony with these tales of nocturnal pleasures and the dawning of the age where family must come to the fore.

Moffat’s performance on the afore-mentioned ‘Lock up the Lambs’ is anger personified, “Throw seed on the bed and raise them up, fill your glasses and fill your cup, the spirit will prevail,” he spits. And yet on ‘The Tangle of Us’ there’s a real soulfulness. “They cheered us on and whistled / as they fell to home / the city send its blessing / so hungry hands can roam.”

The electro beats of ‘The Unseen Man’ gets into the gritty heart of the destitute as they make their way to someone’s home at kicking out time. It’s the soundtrack to the walk of shame: “Fuck going home / give me chip shop scuffles / and screaming sirens / and romance among the rats.”

The narrative arc of the album (which almost delves into concept grounds, but not quite) sees the following track soundtrack an awkward fumble with a textbook delivery (literally, delivered as from a textbook) from Moffat as he describes this unknown couple’s descent into sodomy with sultry backing vocals and the longest five seconds of dead air in recorded music history.

From here we progress through the gorgeous, string-backed ‘Street Pastor Colloquy, 3AM’ to the increasingly sentimental, ending on ‘We’re Still Here’.

As always with Moffat, where there is despair (“the street ran out of charity / and Oxfam closed its doors”), there is hope (“We’re still here / we’re still here”). And there is hope. The world is turning to shit, and it’s dragging us along with it, but we have a choice on how we want to make the journey – sitting alongside Moffat and the hugely talented Wells is as good a perch as any. As the album ends with a return of the car indicator, we come full circle. The view might be dark, bleak and full of dread, but that doesn’t mean it can’t still be beautiful – and that’ll do, won’t it?