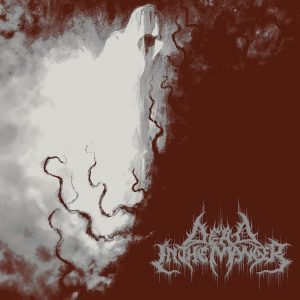 More and more it seems like anomaly is become a bigger and bigger thing with bands, especially those that dabble in the black metal category. Don’t get me wrong, there’s nothing necessarily wrong with it, though the taste leaves a tinge that’s three-fold: on one end, you have the band simply wanting to cast aside member identity in favor of simply being measured by their musical standards and approach. On the other end, and certainly the more presumptuous, there’s the possibility that the band simply wants to be severed with its old or current namesake(s) altogether and give themselves the freshest start. A third possibility is the hope that the unit can be measured as one over-arching feeling and sound. Bands like Dead In The Manger come off feeling like their aim is the third of these scenarios.

Minimalistic in sound and desolate in mood, Dead In The Manger are a band that strictly state that their aim is to “…play music with the intention of leaving a feeling of unease and despondency.” And their mission statement is certain and true. Dead In The Manger fuse elements of melodic black metal and funeral doom into one sweeping symphony. Their latest offering Cessation is a throbbing blister of unease and emotional skinning. Hell, they’re stripped so bare that between this release and last year’s Transience that the band hasn’t even bothered to name a song, delivering each piece as a “part” instead.

Favoring a more melodic approach to this album, as opposed to the blastier Transience, Dead In The Manger open up the floor with a slow guitar piece and only pick up when the song is two-thirds over. Immediately, it’s apparent that Dead In The Manger have found better grounding with Cessation. The lukewarm, even forgettable tinge of Transience is almost immediately washed away once this picks up. It’s a beautiful, warm melody that the band begins with, but still carries an unease around it. Like something out of a horror movie cemetery.

With ‘Part II’ Dead In The Manger bare their teeth. They come in swinging with a purely aggressive stance and kick through the better part of the song before slowing their pace. It heightens the flow of the album. It’s here that you may notice that while Dead In The Manger had a beautiful, slow melody only four minutes ago, they’re still raw as hell and ready for war.

This is where the duality of the album takes shape. Cessation is something that very aptly melds the aggression of black metal with the slow trod of funeral doom. The band seldom dabbles in both at once, instead settling in to one or the other and letting the unease spill over the listener. When Dead In The Manger are slow, they’re brooding, even threatening. The entirety of ‘Part III’ is a melodic, heavy piece of doom that might even make you believe it’s an instrumental, that is until the vicious, static vocals push in. When they pick up they’re vicious. Perhaps no better place that they display this is on the final track ‘Part VI’, a busy, aggressive eight-minute piece that takes the album out on a proper tired and angry note.

Dead In The Manger is certainly doom and gloom, that much can’t be overstated, but where the band is truly impressive is how much they’ve improved on Transience. The album wasn’t bad, don’t get me wrong, it came off as bland. Cessation shows massive impressive improvement and the band truly fulfilling its mission statement this time. And if they can improve this much over the course of one album imagine what the next one will be like. In summary, it’s fuzzy, it’s depressing, it’s angry, and it’s worth your time.