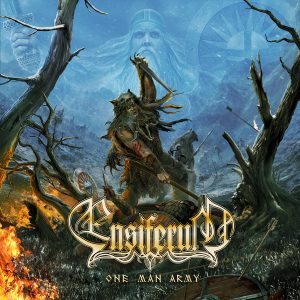 Ensiferum are a Finnish folk metal band from Helsinki. One Man Army is their sixth album release in twenty years as a band. They formed in 1995 and released their debut album in 2001, and have gone through various changes in line up during that period. The previous album, Unsung Heroes, had some very good songs on it, but ultimately was not as stellar as their previous releases. The same cannot be said of One Man Army, which is an excellent return to form and is brilliant.

The album begins with the instrumental ‘March to War’, which signals the bands intentions on this album, as it is rousing and fires you up for what is about to come. And straight away they smash into you with the heavy ‘Axe of Judgement’, which begins heavily before symphonic elements and choral chanting are added in half way into the song, as the song builds to a climax.

Heri Joensen from Tyr joins in on the fun on ‘Heathen Horde’, a great song about going to war, which will have you singing along and pumping your fist in the air throughout. Things get heavy again as the title track frantically opens and it never lets up until the next track ‘Burden of the Fallen’. It is an acoustic song with clean vocals, that lets you catch your breath before the excellent ‘Warrior Without a War’. Like ‘Heathen Horde’ this will have you singing along to it.

‘Cry for the Earth Bounds’ is next before we get the fantastic ‘Two of Spades’, an enjoyable song, which is unlike anything else on the album as it is about gambling and drinking. We then get another anthem with ‘My Ancestor’s Blood’ before the longest song on the album ‘Descendants, Defiance, Domination’. The song is over eleven minutes long and begins by evoking memories of our favourite western movies with its opening guitar solo before it moves on to more solos, chants, uplifting choruses and spoken parts on top of some excellent guitar and drum work. The album finishes with ‘Neito Pohjolan’ which is a Finnish song. The special edition has 4 bonus songs that are mostly covers except the hilarious ‘Bonus Song’, which has you singing along as it is a bonus song.