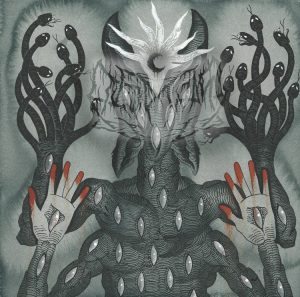 “Every fucking thing that crawls is gonna pay.” Such are the first words that open blow open the doors to the latest Leviathan album, Scar Sighted, after a short, ambient intro. Little is the one man band, fronted by Jef Whitehead (a.k.a. Wrest), stranger to misanthropy, hatred and utter bleakness, but this Boardwalk Empire opening dialogue serves to kick down the doors for his latest offering. In many ways this is a new kind of pain and agony for both the listener and Whitehead himself. Some may still be washing their mouths of the lukewarm True Traitor, True Whore and perhaps feeling reluctant or disarmed concerning Scar Sighted. And you should. It’s not the Leviathan you’ve come to know. But it is one you will come to love.

There’s an essence and punch surrounding certain musicians and groups like Darkthrone, Celtic Frost or Mayhem that simply burst with originality. No matter what, no matter how, no matter the method in which they approach their creation they always stand out amongst the bunch and put forth a unique identifier. Something like a fingerprint rather than a xerox of another band. With Scar Sighted we see Whitehead mostly moving past his black metal roots and strafe into a more dominate, moody death metal territory. Tracks like ‘Dawn of Vibration’ kick in with old school death metal sensibilities; thrashing and punchy, tweaking with ferocious urgency.

Black metal is not all lost on Leviathan though. The sound that Whitehead has been conjuring since 1998 still floats amongst the soundscapes. ‘Within Thrall’ kicks forth with a black metal urgency in composition and mood, which might bring the listener back to Whitehead’s earlier works. The title track ‘Scar Sighted’ is certainly one of the most tortured and brooding black metal pieces he’s ever written. A ten minutes ambient piece that gives the listener the sense of being haunted by some Lovecraftian horror. And just when the dialogue from Se7en ends, Whitehead moves in for the kill.

Whitehead’s vocals this time around are all over the place. From gutteral growls to shrill screams, clean moments, and the insane interlude of in the middle of ‘Dawn of Vibration’ that sounds like someone’s being tortured slowly. It’s agonizing in the best way possible and often manages to sound like it’s coming from the dark end of a long, ominous tunnel. The echo and wail of Whitehead’s voice, especially on tracks like ‘A Veil is Lifted’ bring out all the more horror that this record manages to so perfectly squeeze into a chipped mason jar.

It would be pressing and difficult to call any time spent with Scar Sighted unnecessary or “fatty”, for lack of a better term. Scar Sighted is an amazing experience of horror, agony, despair and depression. The album feels more like the whole of a beast rather than a collection of songs. It’s like watching demons being exorcised from someone’s skin and as each one of them tears up from the flesh and caresses your face before falling back down to the hell from whence they came. It’s a damn great album and one of the best you’re going to hear this year.