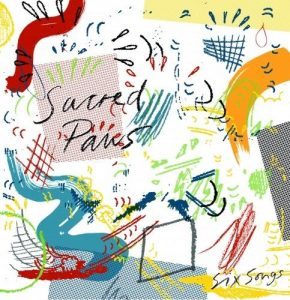 When a record is released on Rock Action, Mogwai’s own label, it tends to be worth sitting up and taking notice. It’s no different with Sacred Paws, a female duo who’ve been plying their trade of jaunty rock vignettes for some time now.

This 16 minute glimpse is being released at the perfect time; it’s infused with vitamin D and evenings in beer gardens. Opener ‘I Wonder’ introduces itself with self-assurance and swagger, but without the breathy arrogance that often accompanies such an attitude. Sacred Paws are simply declaring that they have something to say and are inviting you into their world. It’s a world full of character, emotion and fun and permeates the entire listening experience.

It’s frankly hard to believe there are only two members of Sacred Paws, such is the energy and depth of the music. The effected and harmonised vocals that complement a barrage of catchy riffs make them reminiscent of Panda Bear and Something Beginning With L. I’m not saying these little numbers aren’t enjoyable – because they are, and hugely so – but it would be good to hear Sacred Paws really go for it over 5 or 6 minutes. These songs tell stories and I’d love to hear a complete novel. This is a terrific debut.