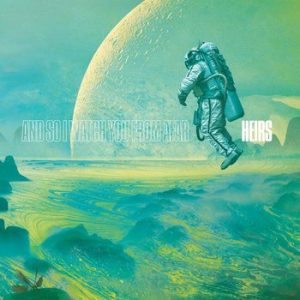 And So I Watch You From Afar |  facebook |  bandcamp |

Northern Ireland’s hardest working heroes And So I Watch You From Afar are back with album number four. I’ve had the absolute pleasure of living with this album in shrouded secrecy for over 2 months and it’s been killing me to even mention it to anyone at all. But now I can shout it from the rooftops. HEIRS IS THEIR BEST ALBUM YET!!!

My first encounter with ASIWYFA was as part of a local gig night in Belfast many moons ago. I had a preconception that a band with this name would be some indie shite that I’d want to get through as quickly as possible. Then within seconds, it was apparent that their particular brand of expansive instrumental rock was of massive appeal to me. Over the next few years our paths would cross on various stages and even a brief rehearsal/recording event gave me a musical career highlight. Such is the determination of the band members, they have proceeded to see parts of the world I never will and they continue to consistently release brilliant music.

With previous band member Tony Wright in the line-up, And So I Watch You From Afar was a confident debut with panoramic vision, the tracks sprawling at times, little concession to radio friendly sound bites. The very fact that here was a band with no label backing, striding forth with an album that they made and released (pretty much) all on their own a defiant message to the masses. The bar was raised with follow-up Gangs (a record of the year at Echoes and Dust); the album launch show in Belfast was incredible, Gangs played in its entirety. By now, the band had transformed into a touring behemoth and their confidence levels veered stratospheric. With the Letters E.P. and the eventual departure of Tony, the band sounded different, an increasingly mathematical sound starting to replace the widescreen tuneage of old. Third album All Hail Bright Futures caused much consternation with much more emphasis on vocals and shorter tracks full of technical expertise, but it was fidgety at times and hard to digest. Having said that, it’s apparent that to get to Heirs, that album had to be made.

I must confess, when the first moments of opener ‘Run Home’ propelled forth from my earphones I felt a little surge of disappointment. The first section of the track is a manic romp of technical guitar playing and a chant of “Run!, Home!” that apes some of the irksome parts of All Hail Bright Futures. Thankfully, the second section features some mesmerising tender guitars shimmering and a sky scraping solo that recalls their earlier records. Ending in a hectic blur of the first section again, the track takes a few listens to fully engage you but that mid-section provides instant gratification. It’s a gamble putting the weakest track second on an album, but ‘These Secret Kings I Know’ sits precariously in that very position. Harking back to the song based E.P. Tonight the City Burns (this time guest vocalist is Sargent House label mate Mylets), the manic flurry of words spewed forth gang style and multi-tracked, finds the melody follow the guitars too closely for my liking. Said melody isn’t particularly strong.

It’s with ‘Wasps’ that the album truly begins to deliver its reward. A buzzing riff hovers intensely while more layered choral vocals entice our eyes skyward. This track has so much happening and every listen brings new sounds to the fore. As I’ve said, this album has been listened to a lot since it landed with me. Clocking in at under three minutes, ‘Wasps’ feels much longer such is the cleverness of the intricate hooks and melodic twists. With Heirs, the band are exploring a new sound that brilliantly manages to envelope their early post rock tendencies with the metamorphosis that saw them become more mathematical.

Showcasing a clear influence of Irish traditional music, the chirpy guitar intro and melodic vocals of ‘Redesigned a Million Times’ explodes with unbridled joy. By now, these gang vocals are either going to severely piss you off or captivate you. How much of this new sound is down to Niall Kennedy? (A vocalist by rights from previous band Panama Kings). One of my favourite tracks (though it took many listens to win me over), the band show a clear ability to write a song, yet strangely it still feels instrumental. Chris Wee does another stellar turn at providing the right level of intricacy and primal thuds, as and when required. Drum parts for the album were actually recorded in Belfast’s Mandela Hall venue for cavernous effect. This tune is another that crams what seems 100 hooks into a four minute song. Clever bastards. Do listen out for the lovely Ulster accent at the vocal fade-out.

There’s a tip of the hat to the Letters E.P. with ‘People Not Sleeping’, a guitar effect overload, more metallic in tone as the guitars rage hard. ‘Fucking Lifer’ kicks off as a mathy shot of pinging guitar flicks and rubbery bass lines before mutating into a warped and sour sounding vocal section. The vocals are highly reverbed and located so far in the background the words are indecipherable but it lends the song a lovely ghostly quality. A really odd and inventive track. The trilogy centrepiece of Gangs is recalled on ‘A Beacon, A Compass, An Anchor’, the track feels like a story is being told as the instrumentation builds and the voices swell to dramatic effect. Perhaps with a little hint of prog rock, the tendency to overdo the effects is shunned in favour of regular clean guitar sounds.

‘Animal Ghosts’ has a massive wave of melodic guitars and a heavenly choir of stunning voices. The risks being taken on Heirs are vast but seemingly logical due to the band’s progress as songwriters and performers. This doesn’t surprise me at all having witnessed Rory Friers’ recording techniques and vision. The guy’s amazing ability to edit and arrange sounds also coming to the fore on Heirs.

So to the title track, ‘Heirs’, which begins with a choppy nodding riff and a slinky, kinky lead line that is persuasive and very melodic. A spacious breakdown of ethereal guitars gives the track a very clever dynamic. Chris Wee and Johnny Adger lock horns with a mid-section of Zeppelinesque proportions while Rory and Niall dual with some ferocious guitars. The ghost of a dazed and confused Jimmy Page flickers before Adger unleashes one of those trademark imperious deep bass throbs to signal impending epic sounds. When the guitar coda kicks back in the band end the sublime track with an eruption of never before heard guitar sounds and it’s a truly magnificent moment.

Delicate joyous guitars introduce album closer ‘Tryer, You’ and the skies are again stared at such is the effect of this transcendent music. A definite hark back to early tunes, but elevated with superb production (Rocky O’Reilly does it again, shared with the band) and an expert knowledge of guitar effects. The ending of this track (and the album) is wondrous, those heavenly vocals return to send us on our way, a majestic choir and heartfelt melody of “oohs” and “aahs” working effortlessly well with the serious hammering Wee gives his kit. The sounds are so full of life that we’re transported to a place where traditional guitar sounds are distant, experimentation allowed to flourish. A fairground myriad of twinkling effects ends the album. Stunning.

To find myself in the honourable position of writing about one of my favourite bands and one time peers amongst the local scene has been a daunting challenge. Apologies if I’ve overdone the praise or the mentions of band encounters. The truth is, I haven’t spoken in person to any of the band since Gangs came out. That shows you the level they operate at nowadays and I do not begrudge them one iota of their success. I’ve encountered a lot of bands over the years here and no-one has shown the level of determination that ASIWYFA have displayed. The hard work ethic has never dwindled and they fearlessly venture to countries that other bands neglect. Their fans are extremely devoted and I can understand that devotion as the band maintain a very humble presence on a stage, clearly enjoying the privilege of being able to perform their music and work their magic. That fan base must surely be set to rapidly expand as Heirs is a perfect mix of old and new sounds and as I shouted at the start of the review, their best album yet.