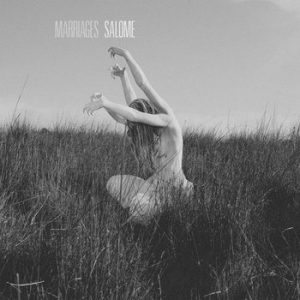 I’ve listened to Marriages’ first album, Kitsune, more than any other release. Never has an album been more immediately demanding of my attention, hitting me like a freight train every time I heard it. Out of the ashes of Red Sparowes had risen Marriages, a fearsome trio with a sound all their own. Needless to say, expectations were high for Salome; a band with pedigree like Marriages had a tall order to fill, not only for fans of Red Sparowes and their first album, but now also in the wake of Emma Ruth Rundle’s well received solo album, and fans of Rundle’s first band, The Nocturnes.

Salome isn’t the massive punch to the gut Kitsune was. It lacks the immediate, overwhelming power of their first album, but I noticed a strong influence from Rundle’s first band, The Nocturnes, which also featured Andrew Clinco on drums. Admittedly, I had expected this album to be Kitsune but longer, but it’s definitely not. While Kitsune’s intensity was impossible to miss, Salome is a more subtle, yet no less ferocious recording, one that rewards a deeper exploration.

The biggest change in Salome is that Rundle’s vocals are far more forward in the mix, and less affected than they were on Kitsune, this results in a much more lyrically focused album, another indicator that they’ve drifted further away from Red Sparowes and more toward The Nocturnes. You can also see that Rundle has become a lot more confident with her lyricism since Some Heavy Ocean was released to very positive reviews.

Andrew Clinco’s drums are the prominent instrument on the album, often becoming the focal point, cutting through the dense, distorted mix laid down by Burns and Rundle. This is most apparent on the title track, which almost feels like a duet between Rundle’s voice and Clinco’s drums against a backdrop of thick guitar and bass textures.

While I didn’t fall madly in love with Salome as quickly as I did with Kitsune, I eventually came to realise that it’s probably a better album. I’ve listened to Kitsune dozens of times, but every time the experience is much the same. Every time I listen to Salome, however, I find something I didn’t notice before, and my appreciation for it grows. Salome confirms that Marriages aren’t a 26 minute flash of brilliance, but one of the stand out bands of this generation, lead by one of the strongest songwriters since Kate Bush.