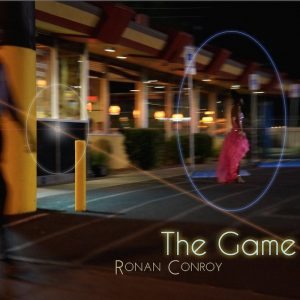 Ronan Conroy is a New York based singer songwriter. His previous work was with dark folk band The Listeners and goth-inspired Oh Halo, for whom Ronan played guitar and shared songwriting duties.

In 2013 Ronan embarked on a “never-ending album” project, recording over 30 songs in the first year, working with the incredibly talented producer, engineer, and multi-instrumentalist Charles Nieland (guitarist with Her Vanished Grace), with a host of guest musicians including Justin Wierbonski (Children of Mu, Quiet Sons, Demonic Sweaters) and Satoshi Inoue (Quiet Sons, Cerenkov).

I had the pleasure of reviewing Discontent, his first solo offering, late last year and I am delighted to say that the second album was released at the end of February.  Amazingly the next installment is already in production.

Where Discontent was brooding, introspective and largely acoustic, The Game is a “bigger” album.  It is bigger in sound and bigger in outlook.  The stripped back acoustic approach is largely replaced by a full band sound and the songs are much more outward looking.  What the albums share though is that they dig deeply into the dark side of life.  No subject is out of bounds, drink, drugs, prostitution and the seedy side of big city life all get a run out.

Ronan Conroy honed his songwriting skills studying Dylan and Nick Cave and those influences are clear once again.  Like those masters, Conroy is extremely adept at building contradictions, layers and dilemmas into his songs.  His songs are often metaphorical and allegorical, something that comes over really well in ‘The Princess, the Coke Whore and Magdalena’.  The song reacquaints us with Ramon and Magdalena from Dylan’s ‘Romance in Durango’, as Magdalena lies with her dead lover.

We are introduced to the three sides of her personality: the princess on her wedding day, the coke whore turning tricks in a back alley for a line of coke and the wife, daughter and mother that is Magdalena.  It shows us that people have many faces and each of sees a different face at different times.

The Game reflects on life’s winners and losers, one light and dark, joy and despair, life and death and the stories that underpin each of those facets are told across the piece.  In ‘How Long Kitty?’ you get light bound in darkness.  The melody is bright and uplifting and holds out a message of hope “what we have will live for ever so you say” then Conroy cruelly smashes that hope as he observes “but I won’t live forever, I’m dying every day”.

‘Give me what I need’ conjures up a vision of the man who has everything and yet has nothing. “I’ve got everything I need, but I ain’t got what I need.”  You see the rich man surrounded by material wealth but unfulfilled because something is missing. ‘We’ve all night’ builds on the theme of a lack of fulfilment, claiming “its all right now, I’m all cried out”.

‘One Way or Another’ sees the protagonist trapped in the cages of an unfulfilling job and an unfulfilling home life, knowing that so much more is possible but not having the courage to chase his dreams.

‘Right or Wrong’ sees the pace lifted another notch, driving electric guitars set the tone and Conroy hints that you know what is right, it is there inside of you: things are not black and white but the answer is there if you choose to open your eyes and see it.  The higher energy is maintained through the rest of the album but the contrasts remain “we are going nowhere fast, but we are going there much faster, beyond the point of pointlessness,” deliciously ironic observations in ‘It Comes Around’.

Once again this offering from Ronan Conroy holds together beautifully as a piece; its wry observations on life are the theme on which everything hangs.  It is more upbeat and perhaps more instantly accessible than Discontent but it still feels part of an overall story.  It is hugely enjoyable, interesting and rewarding and it still carries secrets that are given up only after a little effort on the part of the listener.  The Game is another wonderful piece of work by Ronan Conroy and it is by some distance the best album I have heard so far this year.