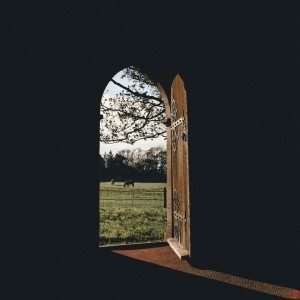 Some albums are about more than music. This third offering from Lone Wolf is very much one of them. Having won a number of fans (including  Wild Beasts, Bat For Lashes, St Vincent, John Grant, Broken Bells, Jose Gonzales and Radiohead’s Philip Selway… deep breath) with his first two albums, Paul Marshall, AKA Lone Wolf vanished from view. Not only did he stop making music, he seemed to have no desire to start again, getting married and taking a full time job (though he did find time to score a film for Tunisian director Nejib Belkadhi’s Bastardo). Then, last summer, Marshall revealed he’d been suffering from anxiety and his illness was effectively directing him through life. He was only coaxed back into making music as Lone Wolf with the discovery that his one-time bandmate James Kenosha’s studio ‘The Lodge’ in Bridlington was to close. So, long story short, Marshall holed himself up in The Lodge for six days with Kenosha and trumpet player David Wärmegård to see what would happen, what ghosts would surface in the room where he’d created much of his previous output, and what stories would emerge from a mind so sore.

The result, which is released in its rawest form, with no guitars, no synths, no ‘studio trickery’, is a remarkable achievement; a collection of songs that ache with emotional depth.

It begins with a lone mute trumpet, a sound from another age, quivering into the distance. Then comes the piano, the dominant force of the album along with Marshall’s troubadour vocal. ‘Wilderness’ is a sub one-minute intro that introduces the bare necessities required to create the album.

With ‘Alligator’ the delicate beauty of Marshall’s falsetto truly shines. Clunking piano keys and that trumpet set an atmosphere that’s part noir soundscape and part wilderness. Drums pound out of time deep in the mix; stopping, starting… reflecting the demons Marshall has had to content with. When he describes a character in the song as “A manipulating, exacerbating, real frustrating, masturbator,” there’s a tragic level of self deprecation.

Lodge is a confessional; it’s an album of self-preservation born from a desire to give his friend’s studio a send off. It is a deliberate and transparent attempt at catharsis. It’s fair to say such an endeavour could have gone one of two ways – even Marshall acknowledges this on ‘Mistakes’ in what must be the first real-time reflection on the recording process: “I make mistakes / I think I’m making one right now / you’re hearing every note of it”.

This confessional theme runs throughout the album. “I wish this was something that I could simply get over / but the more I fight the more I realise I should just let go” on ‘Crimes’ which explodes on that ‘go‘, Marshall’s voice like porcelain. “I’ve been sleeping with a blindfold on, sleeping with the curtains drawn,” he sings on ‘Give Up’, the closing part of this opening trio of bleak songs that have a subtext of despair coursing through them.

The arrangements are almost bare, the production crisp; this allows Marshall’s voice to crack through the ice, the only thing really on the surface, occasionally pulling every other element along with it, occasionally using them as a platform – such as the refrain on ‘Give Up’, which talks of drowning on dry land – a metaphor for anxiety if ever there was one.  This is a lonely album. Despite the help of Kenosha and Wärmegård, it feels as though Marshall really is out there alone; Wärmegård’s trumpet in particular feels like an observer.

‘Mess’ is understated to the point of minimalism, but where this could be a weakness, its emotional depth makes it a strength. “We don’t need this,” sings Marshall. It’s as blunt as he gets. “I just don’t want a part of this mess anymore”.

There’s progression in the tracklisting, by the time we reach ‘Art of Letting Go’, he talks of throwing a suitcase from the bridge, just being sure not to go after it. He feels the “sweet caress of devils and the rest” (‘the rest’: what a beautiful description, so grand in its vagueness!) but “wouldn’t have it any other way”. A redemption of sorts, we feel, is near.

On ‘Pripyat’, named after a town in Chernobyl, there’s a change in tone, the piano discordant in its introduction. It’s a slow track, awkward, the instruments – piano, trumpet, drums, vocal – all seeming to work against each other, battling for dominance; it’s a clever technique, creating metaphors through tempo and volume.

Harmony returns on closing track ‘Token Water’, which feels more upbeat, major chords replacing minor – there’s the introduction of jazz cymbals way off in the distance among a clanking pipe and Marshall talking about “keeping a safe distance /  from the edge” – different vocal tracks sharing the two halves of this refrain as the piano and trumpet build. It’s only when it abruptly ends that you’ll notice you’re holding your breath.

It’s a strange things these days to hear an album with no guitars, no electronics, no amplifiers. It makes ‘Lodge’ all the more delicate.

So this is the end of Lone Wolf. Hopefully it has given Marshall everything he wanted it to; he deserves it. As epilogues go, it is more than fitting, it’s perfect.