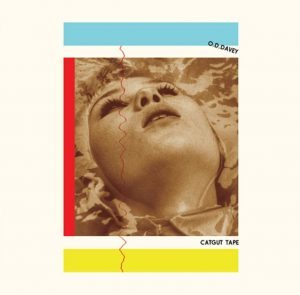 Catgut Tape is an oddity of an album, created by O.D. Davey. While ‘bedroom music’ is hardly new, this lo-fi folktronica carries with it a  atmosphere shrouded in tragedy that is deeply engaging.

The multi-talented Davey, who is also a filmmaker – recorded the album while still in his late teens, between Aberdeen and Essex. It is the former that is more apparent across the album, his north-east brogue heavily disguised under layers of distortion.

Mixing acoustic guitar, drum pad and plastic organ, the collection of songs focus mainly on the ups and downs of youth, mostly through that timeless medium of the love song. ‘Jessica’s Song’ for example, which starts with a simple drum beat and mixed down acoustic lick, Davey tells the story of “big, brown, beautiful eyes,” his limited vocal ability making the song more fragile – though the understated murmur does wear as the album progresses.

It is a bleak collection. ‘Pressure’, despite its chiming percussion drags a little, though ‘Rabbit Fur Coat’ (not a cover of the Jenny Lewis track of the same name) is more upbeat, the lyric wistful and full of longing. Tracks such as ‘Honeymoon Blues’ err possibly too far towards experimentation and take the album off piste a little, despite being another fine example of Davey’s lyrics: “I despise this placid ocean / beneath our balcony of love / with a push and a shove you could be floating.”

However closer ‘Essex’ is a lovely piece of songwriting – the topic of Davey’s love this time the county he called home, the vocal mixed a little higher, which actually shines a light on Davey’s technique.

In taking that folk tradition and fusing it with bedroom lo-fi, Davey has created something pretty original – it won’t be to everyone’s taste but its delicacy is to be commended.