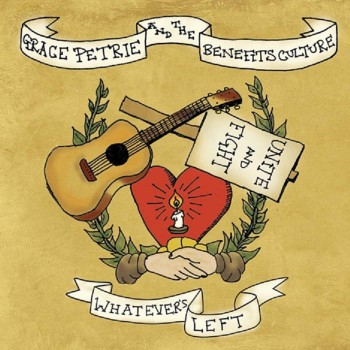 There are some albums whose opening tracks also make perfect gig openers. Frank Turner’s ‘England Keep My Bones’ and ‘What A Terrible World, What A Beautiful World’ by The Decemberists are two that come to mind, and when I pressed play on ‘Whatever’s Left’ yesterday morning, I mentally added it to the list. ‘There’s A Fire In Your Heart’ begins with Grace, Jess and Caitlin singing completely a capella – demanding your attention from the off. In that sense, it has parallels in ‘Rise’, which opened Petrie’s 2011 album ‘Mark My Words’, but whereas Rise feels like a warning and a call to arms; “As the judgement day draws closer, as the reckoning draws near, there’s plenty more of us than you here”, ‘…Fire’ feels more like a plea – a call to regroup, stand fast and hold together; an acknowledgement of the defeat felt by so many people on the morning of 8th May.

Grace’s post-election blog post was stark, resonating shock, anger and grief from every word. “It was a defeat without mitigation, the very last fuck-you from the Tories coming in Sheffield Hallam where Conservatives had organised tactical LibDem support to keep Nick Clegg from losing his seat, as he so richly deserved to do…Now, in the wake of the most devastating Tory victory of my young life, I have come out of the shock and grief with more determination than ever that we absolutely MUST win in five years…This is the most dispiriting, most dangerous time for us. The temptation to give it all up and accept defeat will snap at your heels. The most vulnerable people in society who cannot fight for themselves will need you to keep going on their behalf. On the days that I talk about giving it all up and accepting defeat, please remind me of that too.” She announced a new album – “if I have any skill that I can lend to the leftwing effort to both resist this evil government and to help elect a different one when the time comes, then writing and playing songs that can, in some small way, soundtrack the struggle is it” and, less than a month later, the Good Ship in Kilburn is jammed full of people already fluent in songs they’ve had in their possession for at most 10 hours (I know that as fact, having pre-ordered the album myself and receiving it at 11:13am on the morning of the show). I remark that this seems like quite a quick turnaround and Grace laughs. “I won’t say I bit off more than I can chew,” she begins “but I will say that there was absolutely no more room in my mouth. It was definitely an emotional response to the election – fuck this, I’m going to write loads of political songs, and we’re going to go out and play them, and we’re going to fight – and I stand by that sentiment, but the reality of announcing an album with a release date four weeks later..well. I bit off the absolute amount that I could chew, and I didn’t choke, but there were moments when I thought that could have been a possibility”.

I ask how different the album would have been had the election result been different – presumably not much, given the refrain in ‘You Pay Peanuts You Get Monkeys’ – “When I needed Labour were you there, were you there?” sings Grace, in homage to ‘When I Needed A Neighbour’. “To me, the response of the Labour leadership since the result is almost more heartbreaking than the result itself,” she says, “I desperately wanted them to see that they weren’t winning elections on center ground – the two outright winners of the election were the Tories, who campaigned on an explicitly right-wing ticket, and the SNP, who campaigned on an explicit left-wing one.” And UKIP, I say – with 4 million votes and 2nd place in a lot of constituencies. I talk about the fact that as a long-term champion of PR, I find it really uncomfortable that it’s a cause now being championed by UKIP, and Grace pulls me up short. “A lot of people have said to me since the election that FPTP is the only thing keeping the racists out. I have so many problems with that argument I don’t even know where to begin. The way to bring back people who have gone to a right-wing, reactionist party purely because they’re disenfranchised and not listened to – the way to win them back is not to systematically not listen to them. That’s the worst thing we can do. People frequently compare UKIP to the Nazis, and I don’t think that’s particularly hyperbolic to be honest, when you look at some of the early days of the party. And ever was it thus – people feeding on the fear that we don’t have enough to go around, so we’re all in competition with each other, and it’s not true. But if it’s true that 3.5 million people in this country found that the party that represented them the most was UKIP, we have do something about that. And the thing that we do is we don’t systematically silence those voices. Just because I disagree with people who voted UKIP doesn’t mean that I don’t think they deserve a vote. That’s a really dangerous road to go down.”

Electoral reform is clearly something Grace is passionate about. “The fact that concepts like VoteSwap and I’llVoteGreenIfYOuDo have been invented and accepted shows that the system is fucked. If you can see fit to have a leaders debate with 7 parties, and at the end of that everyone still goes “well it’s a choice between Labour and the Tories”, then that system is totally fucked and you have to address what that means. I do think it’s worth noting that if we did have PR, there would have been far more Green votes. I speak to so many people who come to my gigs and they say “Look, I totally agree with you, I’m fed up to the back teeth of Labour, but I can’t vote anything else, I’ve got to keep the Tories out”. FPTP has been fucked for the whole of my political life, but now it really isn’t fit for purpose.”

We talk about one of the songs on the album, ‘I Do Not Have The Power To Cause A Flood’, in which Grace casts a spotlight on homophobia around the world, making it very clear that however much we might like to believe ourselves ‘beyond bigotry’, it remains and requires addressing. “Well, I’m gay, obviously. So obviously it’s something very close to my heart, and I sing a lot about homophobia. But I think I don’t really do enough to address the other letters in the acronym. John Stewart said something about Caitlyn Jenner – a lot of people have been pointing out the horrible, garden-variety transphobia, and he did this whole thing where he says “So, when everyone saw you as male, they complimented your athleticism and your business acumen, and now you’re a woman you’re treated like every other woman, and we only care about what you look like.” and I think we’re just getting to the beginning of a broader understanding of true intersectionality. I think a lot of the time we like to think we’re in this post-prejudiced world, and actually, there’s so much left to do. I was really fortunate that the news story with Top Gear [Jeremy Clarkson tweeted a photo of himself asleep on a plane with a sign saying ‘gay cunt’] came up on a week I was doing the Now Show, because I had this platform to go on the BBC and get to play to an astronomically larger number of people than I normally do, and say “look, do you know what? This is a BBC employee, and that’s not fucking on”. So yeah, I’m really proud of that song.”

I’m not sure how to broach my next question. I was planning to ask what it’s like being in a band with your girlfriend when a lot of songs are about your ex-girlfriends. But during the show, Grace introduced ‘The Heartbreak Handbook’ by referring to a relationship which had ended the previous year, and there was a palpable ripple of sadness around the room as people worked out she could only have meant Jess. “Yeah, we weren’t sure how to really deal with that. Obviously we’ve stayed the very, very best of friends which I’m incredibly fortunate about, and I’m really really glad that it was possible, because she’s one of those important people in my life and that’s amazing. She’s one of the driest, most sarcastic and most brilliant people I know and she kind of takes everything in her stride. Between the three of us there’s a healthy amount of piss-taking, so yeah, we kind of deal with it on a case by case basis. But most of the songs about previous girls was about how they were terrible awful people, which kind of made it less of an issue!” Not ‘The Best Thing I Never Had’, I say. That was a pretty heartfelt break-up song. “With ‘The Heartbreak Handbook’ it was nice to pay tribute to something which was amazing and just because of circumstance didn’t work out, and we’re still really important to each other and always will be. Whereas ‘Love Is My Rebellion’ was written from the opposite point of view – about something that went really terribly wrong, and that was something that I had to work out through songwriting, and I’ve always done that. And then after all that me & Jess got together and it was kind of a bit like “so, I have all these songs about my ex-girlfriend that we’re going to sing on this record”. But like I say, she’s always borne that with nothing but humour and grace and integrity. I’m so lucky to have both of them – Caitlin and Jess – it wouldn’t be what it is without them and I’m really grateful for both of them with every show that we do”.

The album launch went spectacularly. “Literally maybe the most amazing gig we’ve ever ever done.” enthuses Grace. People who ask where our generation’s political singers and activists are should take note. Last night, they were in the Good Ship. Opening act Tim OT was followed by punk-poetry from Janine Booth, a solo set from Sam Duckworth and Chris TT kept the crowd dancing long into the night with some exceptional DJ skills. The atmosphere was communal and electric – it felt as much like a meeting of old friends or a gathering of like-minded souls as it did a gig. Opening, as I’d hoped, with ‘There’s A Fire In Your Heart’ Grace interwove songs from the new album – ‘Overheard’, ‘You Pay Peanuts’, ‘Workshy’ and the wonderfully emotional ‘Ivy’ (which, despite being the least maternal person I know, had me in tears) with old favourites – the ‘Topshop Song’, ‘Inspector Morse’, ‘Redundancy Hymn’ and, of course, “Farewell To Welfare”, and 150 people raised their voices and their glasses in hope and solidarity and a refusal to give up or give in.

Whatever’s Left? Grace is left. Caitlin and Jess are left. And Sam and Tim, Chris and Janine and Reuben. They’re left. And they’re not going away.