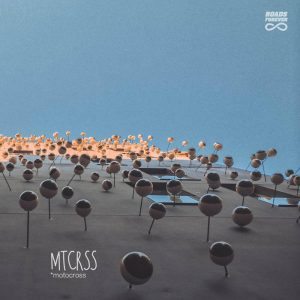 mtcrss are five-piece instrumental band with great humour. The guys confess they like it when a shitty-named band plays great, so they chose some ambiguous order of letters to name themselves. The musical Samsara gathered them about five years ago as a band called Riding a Diplodoc, but something went wrong. With certain team changes they have recently reincarnated. They played lots of live shows, including supporting ASIWYFA at a Yekaterinburg show in April 2015. They have strong intention to develop the scene of their native neighbourhood, the southern Siberia city of Kurgan.

Their other concept is to make more melodic and unpredictable sound rather than tease one riff through the whole song as most of instrumental bands do. Movement is the basis mtcrss build their music on.

Dynamic and dancy at the start, ‘Taco’ smoothly starts turning into a jam session. It is eclectic and 70’s style psychedelic. Clear guitar riffs, mixed with keyboards, are gently sewn into the track’s canvas. A nanosecond full stop emphasises the old-school ending: the final riff, keyboard note and drum smash. This trick comes throughout the whole EP. The final chord is really a dot, no electric volume turns down.

From a disco-punk rhythm, ‘El Italiano’ leads from salsa vibes through to a complicated solo. It is even hard to distinguish it as mtcrss manage to put all this in 2 minutes, make a synthy-pause and finish with post-rock soundwall.

‘Strawberry Girls pt.2’ is a compliment to the US instrumental band of the same name, a favorite of mtcrss’s guitarist. This melody wouldn’t make you dance but rather sit concentrating and enjoying its variety of riffs. They lay down over a torn rhythm. Late 90’s spirit (some lightened ADTI) is revealed in this piece.

The last themes of the EP underline some peculiar sound of mtcrss. ‘Sputnik’ is cosmic and dreamy due to keyboards but still on high speed. I suppose the true-genre amateurs would appreciate its reverbs, walls of sound and complexity. ‘Atlas’ is like two or three melodies played together just without stops and joined by guitar riffs. As the lead guitar changes the motive does too. That track is the finest proof of the inner musicianship of mtcrss.

After a listen it becomes very clear why mtcrss dislike being classified anyway especially as math rock. They prefer jazz, funk and chillwave in the headphones. And, like many bands nowadays, they prefer to mention psych if trying to characterise themselves. Still, none of these appear vivid in their music. Post-rock deepness, mathy technical variety and disco-rhythm make Motorcross EP especially spirited and eclectic.