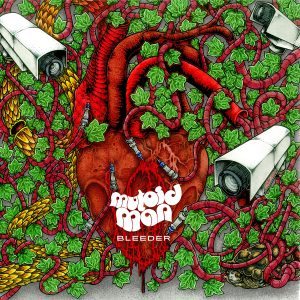 Music theorists may claim that music is all mathematics, but when it comes music criticism things are a little less clear cut. How many times have you read a review that claims that band x sounds exactly like band y + band z, only to find it’s nothing like that? If music were that simple then super-bands would all be life-changingly fantastic – the guys from several of your favourite bands coming together to be on the same record? Why, that should be exponentially magnificent. Infinitely brilliant.

Yet how many so-called super-bands can you name who lived up to their member’s day jobs? They tend to be exercises in ego or excuses for a bunch of guys to get self indulgent to the point of nausea. Get a little something they don’t get at home, as it were. Success depends on how much you enjoy the same influences – finding out the guitarist from your favourite band is an avid Polynesian drone folk aficionado is likely to be at best an interesting distraction and, at worst, a disturbing revelation.

So it’s a rare old thing when parts of great bands come together and create something precisely as wonderful as it looks on paper. On 2013’s Helium Head mini-album Ben Koller (Converge) and Stephen Brodsky (Cave In) came tantalisingly close to doing just that. It was 6 tracks of ecstatic chaos with Koller drumming like he was racing directly towards Valhalla and Brodsky, along with less heralded bassist Nick Cageao, doing an admirable job of trying keep up with him. It was a blast, a crazy headlong sprint into madness that seemed like a fine one-off gem from two very busy guys. Thankfully that turned out not to be the case.

Instead we have their first full length Bleeder, on which they take the foundations laid down on Helium Head and build a temple to the glorious excesses of metal and hardcore on top. Its 10 tracks are prayers of worship to the ridiculous side of heavy music – the sugar rush of the frantic double kick drum siege, the g-force guitar noodling, the ear busting wails of Halford or Dickinson. The moments where no matter how discordant and brutal the sound it coalesces into something poppy, joyous, inclusive; where heavy becomes heady, giddy, absurd.

Mutoid Man took their name from an end of level boss in classic arcade top down shooter Smash TV and videogames seem to play a key part in their formula. Koller has said he spent a lot of time drumming over 8-bit Nintendo themes, the weird rhythms of which found their way onto Bleeder. ‘Sweet Ivy’ is apparently inspired by the second level on classic side-on shooter Contra. The record sounds like playing one of those bullet hell shoot ‘em ups feels – frantic paced, constantly on the edge of panic yet played with a steely focus. For me listening to it brings back the feel of summer Saturday afternoons spent sat indoors while playing R Type on the SNES and listening to a lovingly curated rock/metal mixtape on a battered old Walkman with the play button held down with sellotape. I can almost taste cherryade and cheap crisps.

As for musical influences, well, if you try and spot them all you’re likely to go dizzy trying to keep up. Opener ‘Bridgeburner’ starts out like a turbo charged Iron Maiden; ‘1000 Mile Stare’ careens into view with some fierce prog action, goes into some deliriously good shredding before diving face first into Slayer territory. It seems to only get more intense as it goes on – ‘Beast’ sounds like Carcass gone pop whereas the finger tapping fury in ‘Deadlock’ has more of a mathy post-millennial feel. Everything remains cranked up to 11 right up till the curtain call of the title track ‘Bleeder’ – and even then, despite being more downbeat and down tempo than anything they’ve done so far it’s still an exhilarating barrage of guitar and vocal histrionics. When it’s done somehow only 30 minutes have passed – maybe they figured the listener wouldn’t be able to stand more than that at this level of intensity. And yet you may well find yourself taking a quick breather, having a stretch, grabbing a drink and pressing play all over again.

It’s safe to say they’ve held nothing back on Bleeder. Brodsky in particular goes all out  – exercising every inch of his impressive vocal range from whispers to throat rending wails when not utilising his usual syrupy sweet singing voice that acts as such a luscious counterpoint to the madness that surrounds it. And all while playing guitar that ranges from straight up thrash to mathy, labyrinthine prog riffs. Koller still plays like a man possessed – already one of the all-time great sticksmen here he puts on a master-class of high octane drumming. Cageo, with a decidedly less impressive CV than his bandmates, may end up being the forgotten man of the band but his bass playing on Bleeder is essential – the crunching, guttural adhesive that keeps the band spinning off its axis and descending into absolute chaos.

The prevailing trend in heavy right now seems to be a mix of drawn out doom séances and the twisting of black metal into all sorts of weird and wonderful shapes. Which is all well and good – but if that fella Isaac Newton was right in saying that for every action there is an equal and opposite reaction then Mutoid Man are providing a one band counterpoint, holding the torch for the joyous and jubilant and righteous side of metal. Bleeder is the sound of a band bottling everything fun and blissful about metal/hardcore/rock, shaking it up and let it spurt out all over the place. Not only have Mutoid Man pulled out one of the most jaw dropping and exhilarating metal/hardcore records released in a long, long time they’ve also put out a record that stands up to anything either of its more famous band members have ever put their name to. Given the names involved there can be no higher praise.