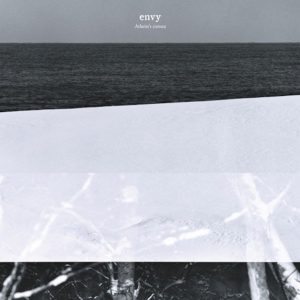 After really enjoying what envy offered up with their last album, I had been periodically checking for news of a follow up for a few years after its release. After a while, I gave up and never thought about it again, constantly hoping, but never receiving. Imagine my excitement when a request to do this review appeared in my inbox, especially without knowledge that this release was even due. I was sweating with the anticipation.

Well friends, I’m here to tell you that envy have delivered with Atheist’s Cornea, the follow up to 2010’s Recitation is an absolute blinder. This is the album that this band have been destined to make for their entire career. It manages to combine the best elements from all of their previous efforts, all done to a very high standard, and at times throughout, better than they ever have previously.

When ‘Blue Moonlight’, the album’s opener began, I found myself asking, “post-rock again…really?”. You wouldn’t be wrong to be fooled, it’s almost become the norm for envy to concentrate on the build up and the mood as of late, and don’t get me wrong, I enjoy that stuff, just less than the envy I fell in love with. My expectations were very quickly ripped apart. The song ignites and almost instantly erupts with energy. Energy I haven’t heard this band achieve in 12 years. The drums pound to a familiar beat, the guitars soar and flail, weaving together and apart seamlessly while the bass lays the solid and thick foundation to everything that follows. Tetsuya sounds reinvigorated. His vocals are gruffer, strained, deeper and all the better for it. They are delivered with a passion and an immediacy I have never heard him achieve previously. I hear a definite influence to the sound and structures in these first few songs that Thursday would have been proud to call their own, which is a welcome touch.

An album highlight for me is the hurricane-like ‘Ticking Time and String’. It starts off peaceful, beautiful and still like a calm ocean, but it doesn’t take long for the band to create a swirling cyclone of sound that moves slowly around and around. The drums keep pace, thunderous and slow, the bass creates dark and ominous layers of sound that reinforce the density of the music while the guitars swirl and cascade through this sonic mass of beauty. We are greeted with strings which pierce through the darkness, momentarily giving us glimmers of hope. Tetsuya is in the eye of the storm, screaming about it all unfolding around him. Seriously, seriously incredible.

The record is recorded wonderfully. The guitars sound absolutely massive, periodically reaching points where they sound as big as ISIS when they were at their most expansive. At other times they sound restrained, crystal clear, and full of beauty with washes of reverb layered on top. The keyboards play a more prominent role in certain songs which is a nice touch, especially on ‘Shining Finger’ where I could listen to the keyboard solo over, and over, and over…

The album manages to comfortably sit itself around the early 2000’s records in terms of sound and delivery, but includes a refined influence from their more recent output. But it has been done in such a way that it never sounds rehashed or recycled. It has the perfect length to achieve this, the songs are shorter and I find that as soon as the album finishes, I want to instantly press play again.

This will be a serious contender for my album of the year alongside G!YBE and Enablers, and I strongly recommend that you check it out.