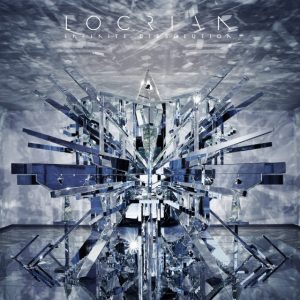 For ten years now Locrian have been releasing a stunning array of music with elements of everything from bleak ambient drone to black metal to krautrock and back again. Their catalog is vast and varied, but still cohesive and carries an undeniably unique sonic fingerprint that makes their progression towards Infinite Dissolution seem planned out years in advance. Much will be said about the theme of the album, taking inspiration from Elizabeth Kolbert’s  book on environmental destruction The Sixth Extinction, but the title may in fact elude to Locrian’s progression within their music. Infinite Dissolution is their most cohesive and structured release yet, but within that structure everything that Locrian and their expansive musical pallet have done previously is dissolved into one singular and powerful musical statement.

Much like their previous release, the excellent Return To Annihilation, Locrian has mostly forsaken the long rhythmless soundscapes of their earlier work in favor of more concise pieces. That’s not to say the atmosphere is in any way lessened because the songs flow from one to another like one seamless 45 minute work. It’s at once dynamically diverse and meditative, but never overstays its welcome. People who are familiar with Locrian will immediately recognized the dense, textured guitars, massive drums and anguished vocals, but also notice a new directness in the approach to arrangement. The opening track ‘Arc of Extinction’ begins with the familiar overdrive drone before dropping into probably the most “metal” riff of their career. The effect is outstanding and as the noise fades into the more melancholy ‘Dark Shales’ it’s apparent that a new focus is at work.

One of the most striking differences on Infinite Dissolution is how guitar heavy it is. Guitarist Andre Foisy has always had excellent command of creating mood and controlling the space and that hasn’t changed, but he takes more of a lead role on this album than past efforts. There are moments of straight up riffing, near shredding and seemingly endless layers of guitar melodies swirling around each other. Even during the heaviest and darkest moments on the album the guitar maintains a sense of melody that cuts through the murk giving the entire record a kind of buried hopefulness. One of the best moments of this occurs during ‘An Index of Air’ when a soaring guitar melody is buffeted by a driving black metalesque beat and airy guest vocals by Erica Burgner-Hannum. It’s both gorgeous and terrifying at the same time.

The more prominent guitar doesn’t mean that the other two members of Locrian have taken a back set. Drummer Steven Hess and keyboardist/vocalist Terence Hannum both deliver some of their best performances on a Locrian album yet. The thick throbbing synth sounds provided by Hannum not only fill the sonic space normally reserved for bass players, but also add another layer of melody, though it tends to be a bit more despondent and acts as a foil for the more uplifting guitar work. Often this is happening at the same time as in ‘Heavy Water’ with it’s warbling synths and delayed guitars weaving around each other while Hannum’s despairing shrieks offer yet another counterpoint to the music. All of these different sounds and moods never sound fractured or disjointed in any way and much of that is due to the solid and powerful drumming. Hess’ drums act as the glue that both holds the disparate elements together and also serves to drive the music forward, often times relentlessly. It’s almost hard to believe that all of this music is made by three people.

From a production standpoint Infinite Dissolution just flat out sounds fantastic. The drums sound naturally massive and never “clicky or fwappy” as many heavy bands tend to. The myriad of different guitar tones are all balanced in the mix and even some of the more severe dynamic and tonal changes are smooth and feel unforced. The vocal mix is especially excellent. Most bands push the vocals to the forefront of the mix regardless of their quality. Locrian uses Hannum’s piercing wail as just another instrument, burying it in the mix and reverb. This approach gives the despondent wailing an even more tortured and horrifying place in the music, the anguish feels palpable. The countless synth tones are all rich, massive slabs of tone and there isn’t a moment on the album that doesn’t sound full.

This album was inspired by the possibility of human extinction and it reflects a sadness about that fact that I think is universal. Whereas most metal that deals with apocalyptic imagery skews towards the negative and hateful aspects of human nature, Infinite Dissolution feels like it is sad about our wasted potential. With the lyrics being fairly indecipherable it’s hard to say if this actually the case but the feelings of sadness and flashes of optimism shrouded by the noise and heaviness makes me think this album isn’t necessarily about accepting our doomed fate. It may be about the tiniest rays of hope, that maybe people are worth saving from themselves. Even if this is far from Locrian’s actual intent, I feel uplifted when this album is over. It is dark and emotionally taxing but it doesn’t feel like a condemnation.

While many fans may lament the more the structured and less droney approach of the album I think this album is the next natural progression for Locrian. Blending drone, black metal, doom, post-rock, prog and ambient music into one piece of music would potentially be a mess in less capable hands. As various themes are hinted at across the music it’s obvious that this is a work made with a unified vision. Their far-reaching influences are dissolved into a fascinating, terrifying, heavy and impossibly beautiful whole. I think this album has potential to reach a much larger audience than any of their previous work and I hope it drives people explore their back catalog as well. It’s not only one of this years best metal releases but one of the best pieces of music in general.