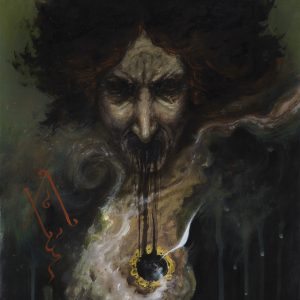 It’s difficult for me to keep a straight face or not feign cynicism when an email arrives in my inbox proclaiming it contains the black metal album of the year. Or any [insert genre here] album of the year for that matter. But it works as some sort of cheap trick, doesn’t it? Hearing a phrase like that stimulates immediate curiosity if one knows the genre well enough to pick out even as few as five favorites for the year. And as I now sit here, months after digesting the new Akhlys album The Dreaming I under some serious contemplation.

Black metal has seen both stagnation and innovation over its thirty-five-ish year history. And while some remain the trv kvltists, others are open to more iterations. Akhlys have only been around since 2009 and with only two releases to their name now feel relatively new. However, half of the band, Naas Alcameth has actually been active in the U.S. black metal scene for much longer with bands like the excellent Nightbringer and Excommunion. Those that know Alcameth’s previous work know that his bands are no stranger to longer songs and are also great a keeping things interesting. And interesting is exactly what I’d call The Dreaming I.

There’s no quick entry portal into The Dreaming I. Those that heard the single track, ambient EP Supplication will note that the band is immediately heavy on mood and this is no different. The droning two-and-a-half minute introduction helps to lay a foundation. The intro is much like one that’s slowly drifting off to sleep before the dream state, or R.E.M., I suppose, hits you and over takes in full. And once it grabs you it becomes as lucid and epic as any dream state.

Where Akhlys hit all the notes is in their ability to bring out something that’s utterly epic. Once the aggression kicks in ‘Breath and Levitation’ the band bring out the feelings of ghoulishness and stark, ripping nightmares. There’s a persistent ethereal presence that the band especially brings out in the keyboard section. The backgrounds often feel prolonged, ambient and like a sneaking serpent. There’s a persistent fear that they bring to every track that gives The Dreaming I a truly hellish, tormented feel. Listen to ‘The Dreaming Eye’ when you’re half asleep. It will creep into your mind and dance its macabre dance across your brain.

All that said, Akhlys have a favoritism for longer songs. And certainly the best nightmares seem never-ending. The band executes this well. However, there are moments where the album feels like it falls a little flat. The ending of ‘Consummation’, a near seventeen minute epic, feels like it could move forward with out the last three minutes. It brings the flow of the album to a screeching halt. Maybe it’s like waking up in the middle of the night, and if that’s what its purpose is, then it serves well. But it also brings a feeling of total removal and break up in flow. And if there’s one way the album could have, perhaps should have gone out, was to wake up screaming.

There is a lot to love on The Dreaming I. The exploration of the sleep sequence and how it can follow you into the conscious world is done excellently here and is extremely memorable track to track. While pieces can feel like they fall on ambiance a little too heavily it seldom serves to remove the listener from the experience, and when it does it doesn’t do so for too long. When Akhlys choose to attack, they do so relentlessly. Songs feel frantic, like they’re trying to break through layers of consciousness to escape the horrid things lying there. Right now, Akhlys needn’t dream about The Dreaming I not getting plenty of “black metal album of the year” nods. Because what they’ve crafted is certainly deserving of one.