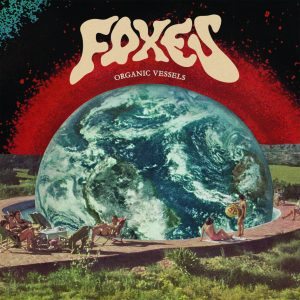 My first taste of Foxes came when the video for their new single ‘Stomp The Earthworm‘ hit my Facebook feed. At the time I wasn’t quite sure what I was listening to, but I knew it was something special. The track opens with a primitive rock beat beneath a tremolo picked guitar riff soaked in reverb. The vocalists screams immediately reminded me of La Dispute, whose album Wildlife I had spun endlessly back in 2012.

The chorus comes alive with a blazing psychedelic melody, then we’re back into the verse for another dose of angsty, introspective lyricism. But just when you’re expecting a second chorus, Foxes take you down a hallucinatory spiral and into a tense section of swirling guitar noise and restrained drum work. The mood slowly builds and intensifies, peaking as the vocalist screams repeatedly over screeching feedback:

Then the whole thing gives way into a gorgeous, shimmering psychedelic breakdown. The effect of the release is intense. Even now, after twenty odd listens, it still hits me like the onset of a panic attack – or one those moments of heartbreaking clarity when you realise you’ve just destroyed something irreparable and irreplaceable.

From there the song gently floats away on a silver sea; a moment of space and peace after the chaos.

What a song! ‘Stomp The Earthworm’ blends psychedelic elements over a screamo/post-punk core, but played with a delicate sense of tension and texture that one would usually associate with post-rock. The track’s impact is heightened by the earthy, organic production of Ron Pollard over at Studio Sleepwalker’s Dread.

I wasted no time in seeking out Foxes’ new album in its entirety.

Despite my enthusiasm for the single, Organic Vessels is a mixed bag. At weaker points the band can sound like an echo of La Dispute or Touché Amoré (and I’m not convinced we need more of those) – but at their peak, Foxes bring an entirely new take on “post-hardcore” as a style. Their progressive approach approach to songwriting allows them introduce elements of progressive rock, post-punk, shoegaze, and psychedelia as needed.

Take the song ‘Ossuary’, which opens with a syncopated blast beat over a tremolo picked riff soaked in reverb – that section wouldn’t be out of place on an experimental blackgaze record. Or ‘Cosmic Ballet’, which closes on a vocal shuddering with delay trails over the top of a pounding, odd-metered rhythm that brings to mind The Mars Volta. Or the pounding, miserable, menacing post-metal crescendo of the album’s final track, ‘The Wind and the Wallow’.

These are the moments that have me excited about Foxes’ future. At times the stylistic departures can feel a little tacked on, but the band’s willingness to experiment is intoxicating. They have certainly succeeded in getting my attention.

Organic Vessels comes across as something of a transition record; it doesn’t flow perfectly, nor does it form a coherent whole – but it does demonstrate the promise of these Perthian post-punkers. I can’t wait for Foxes’ next release; I can feel they have something truly special in store.