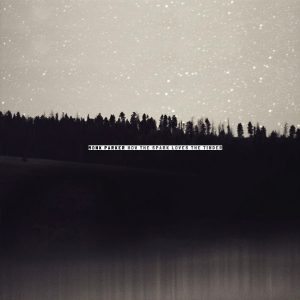 It’s all too common to have a Spotify playlist consisting of the latest and greatest pop anthems of the current day, only to become disposable to similarly constructed songs within a similar genre a week later. What is not all too common amongst the masses is using music as a stimulus for relaxation, de-stress, comfort and reflection. All of these attributes perfectly sum up the new album by Austin, TX artist Monk Parker, whose album How The Spark Loves The Tinder not only has me speechless by its detailed arrangement, vast array of present instruments and relaxing nature, but will have everyone else upon its release on August 28th 2015. The album was written during the breakup of Monk’s band The Low Lows and his relocation from NYC back to his hometown of Texas, where he recorded the album on his family’s farm in their welding shed.

Starting off the album is the lead single ‘Sadly Yes’, which combines a soft and delicate introduction with a dramatic grand cacophony of instruments from around the world, including haunting saw textures, intimate vocals sounding as if they are coming from a 1950’s landline and a punchy 80’s reverberant snare.  What is truly impressive about it is its intricate arrangement, which felt like it was effortlessly put together, yet upon paying close attention to it appears greatly complex. All present instruments intertwine dynamically, creating a dreamy, smooth and relaxing composition which, despite its ‘genre’, will appeal to the average music consumer and genre-fan alike.

Like with many tracks on this album, including one of my personal favourites ‘The Happy Hours’, it feels like there is a strong symmetry between country and a traditional spaghetti western soundtrack. The inclusion of the saw instrument alongside the brass arrangement sounds very reminiscent of an Ennio Morricone score, creating a bold, majestic and triumphant feel. Deep strings set a soft melodic foundation for the track, allowing the accompanying brass room to flourish, giving an enriched sound. It’s blatantly apparent that Parker takes great pride in taking influence from a range of different cultures when producing his songs, which makes a change from many musicians being bound by their own cultural identity.

‘Black Bees’ sees a much darker and haunting side from Parker – though it still does retain country characteristics with a deep slide guitar and delicate acoustic guitar there is something quite mysterious, yet beautiful about it. It could be said to be the combination of tightly-delayed and distant-seeming electric guitar or the subtle harmonica sections, though later in the song the brass and piano sections certainly add an element of mysticism – a slight diversion from your usual ‘country’ song. It certainly separates itself from other tracks on the album in terms of mood, giving it a complete different twist to the album, for the better.

From all of this, I can personally say that this album has definitely shaped my musical taste for the future – I haven’t heard an artist to date that has been able to forge so many different musical genres, cultures and styles together so seamlessly into a cohesive whole. Parker truly deserves the success that will most definitely follow from this album; it’s a pleasant change to see someone create a piece of art so genuine, emotional, dynamic and powerful. The link to his social media platforms are above, make sure to check them out to keep up to date with his on-goings, including his upcoming US tour dates: