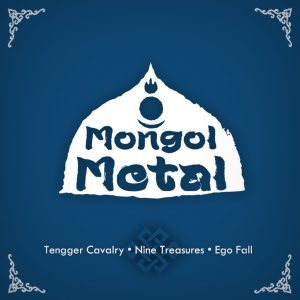 Their style of metal combines traditional folk instruments such as morin khuur (a type of fiddle) and yatga (a type of autoharp/zither). They also use the traditional art of Throat Singing which gives a truly exotic and surprisingly infectious sound to the mix. Similar to their European pagan folk metal counterparts these bands sing about the ancient people that once ruled the lands. In their case, the nomadic people of Mongolia.

Each band is highly established with multiple albums under their belts. They all play a slightly different style of metal from melodic death, black, thrash, nu to classic and rather than review the album as a whole, I’ll go through what each band has to offer.

Ego Fall are a band that fuse traditional Mongolian sounds with death and metalcore. They are probably the most modern-sounding band on the album. Their opening track ‘Wind the Horn’ starts with thundering bassline leading into a morin khuur line over a heavy riff. The morin khuur sounds very similar to a celtic fiddle but with a deeper sound. However, the different tuning creates an eerie atmosphere; perfect for metal. Then the throat singing starts. It’s a very rhythmic style of low croaking that is strangely danceable, this moves quickly into an aggressive death metal chorus of screaming. The song contains an underlying electronic dance sound which comes light in the middle eight.

The next Ego Fall track ‘Back to the East’ brings that industrial dance element to forefront with its opening riff. It sounds like something you might hear in a Hong Kong action movie. The verse however, with its call and response vocals brings the death metal back to us. Even this contemporary sounding song has its traditional Mongolian element, with a moment of atmospheric flutes that brings pictures nomadic people on horseback to mind.

‘The Legend’, also by Ego Fall, has a more standard folk metal feel. Heavy death metal backed by the yatga, which almost sounds like a down-tuned banjo. ‘Soul Judgement’ has a nu metal style with its rap verse and jagged guitar stabs but using Mongolian instrumentation.

Next band, Tengger Cavalry, bring their blend of folk metal and black metal to the album. Their sound effortlessly mixes the acoustic instruments with the distorted which gives an epic and rich sound. The opening of ‘War Horse’ opening is thunderous and galloping (on horseback of course), using the morin khuur and background throat singers. The lead vocal is an abrasive black metal growl that gives a furious contrast to the tinny folk instruments. However Tengger Cavalry stay true to all things metal and enjoy a good guitar solo. The musicianship in the band is excellent and everything flows together very naturally.

Their next track ‘The Expedition’ continues in the same galloping fashion. Excellent morin khuur lines over furious riffs and widdling guitars. ‘Legend of Horseback’ is a particularly epic track carried by the yatga and brutal vocals. Another track named ‘8 Horsemen’ is just more proof that this band love horses.

Nine Treasure’s next track, ‘Fable of Mangas’ continues with the catchy choruses, chugging guitar and double kick drum shows off the band’s musical talents with a screaming guitar solo backed by yatga and morin khuur. Other tracks include the highly infectious ‘Sonsii’ with extra throat singing and ‘Arvan Ald Guulin Honshoor’ which sounds like a classic drinking song but in a Mongolian kind of way.

Overall this album is highly enjoyable, not just in that it’s a slightly obscure genre for a Western audience, but it showcases some very talented bands well worth the listen. Each band offers something different for a metal connoisseur, but they all retain the thing that makes them fresh and exciting – their Mongolianess!