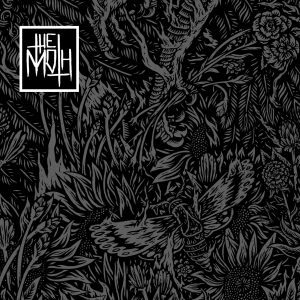 Released on April 4, 2015 via This Charming Man Records

The Moth are a German three-piece who bash out an unusual form of sludge: Freden Mohrdiek on guitar and vocals, Cécile Ash on bass and vocals, and Tiffy on drums. And Then Rise is their second album so far.

First of all, in 2015, sludge and doom have become highly saturated genres now, almost to the point where it’s becoming over-saturated. From a personal view, things are slowly becoming stagnant, but The Moth manage to ease that feeling, especially when injecting moments and styles that bring the catchy and solid riffing of Floor, Torche, H A R K and Kylesa, but then having those grave Gojira vibes, especially with how the joint vocals blend together.

The first track, ‘Awaiting’, on this nine-piecer is probably the best example of this. The band buzzes its way through driving riffs with a strange contrast between generally encouraging lyrics and dual monotone vocal delivery. In writing, this should sound dull but the track has an infectious continual groove that makes that contrast between lyrics and vocals just feel like The Moth are just being factual with the message, it just oozes calm, powerful sense of sternness – which is fucking cool.

The following track ‘Travel Light’ sees The Moth turn to a more thrashy direction, pushing the pace at its fastest on the whole album (with ‘Seek And Burn’ only just behind). Cécile’s vocals have a more variation here, which pops up again on ‘Battle Is Over’, which actually sees her taking up lone vocals, which is refreshing as she and Freden are mostly in unison for the duration of the album.

Closer ‘Fire’ is a 20-minute long track, but is actually just two tracks, the main and a hidden track at the end; something that feels a little bit unnecessary and should just be separated into tracks by themselves – personally, it would have given the punishing journey through it less frictional and drawn-out. That said, the hidden part does bring And Then Rise to a rightfully morose end.

Overall, this is a great effort by The Moth: full of heavy riffs, grooves and down-right catchy songwriting. It just seems though that they’ve still yet to truly ‘find’ themselves during some of the tracks and to bring in a little bit more contrast as well, so it’s going to be interesting where they go on from here. There’s some obvious potential to go even further shown, but this is a really enjoyable release.