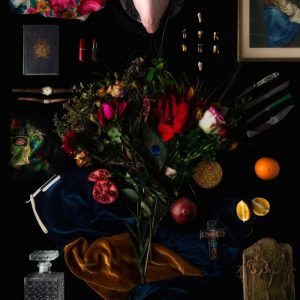 When you talk about Paris, France most people think about romantic, cheesy stuff but only those who have really explored the city can talk about its reality; dirty and noisy streets, the weird smell coming from the river or the crazy people you always can find in the metro are just some examples of the things that live hidden behind all the clichés of love and bright lights over the Seine. This dark side of the famous ‘City Of Light’ is the one that the hardcore band The Prestige presents to all the fans and music lovers through their powerful, chaotic music.

For those who haven’t heard of The Prestige before, I can tell you that their music is raw, full of heavy instrumentations, at times hauntingly melodic and is complemented with the rough and expressive voice of Alex Diaz. Their lyrics are honest, fueled by an exploding rage and written as a poetic interpretation of their reality. Their debut album, Black Mouths, was released in 2012.

AMER is their second album, it has been influenced by the love/hate they feel towards the city where they were born and have lived all their life. It starts with ‘Amer’ a short intro that since the first seconds portrays the chaotic bitterness that this album is based on; its last noises link to ‘Bête Noire’, a dissonant song that include magnificent screams and a delightful sound that is fast and intense, it was chosen as the first promotional single of this album. The third track is ‘Léger de Main’, a darker song that starts with a deep bass line and some atmospheric guitars; its cadenced rhythm changes as the rest of the instruments and voice join in.

‘Enfants Terribles’ has a fast, noisy rhythm that is guided by the awesome drums and heavily distorted guitars, the vocal part is remarkable, in the middle of the song we hear a chorus a little bit melodic that gives a very special vibe and leads to the extreme final part of the song. ‘Voir Dire’ keeps the heartbeats at the top, again the instrumentation is magnificent; the guitars are just perfect. ‘Négligée’ has a calm introduction that for almost 2 minutes sets a peaceful environment, but right after that, the madness begins again; right after the end a cadenced melody slows the rhythm and prepares us for ‘Ingénue’, a short interlude where we only hear the voice and an acoustic guitar.

‘Marquee’ is an extremely violent song, the rhythm is strong all the time and the instrumentation is just magical, this is the song that I like the most because it’s Hardcore at its best, they don’t try to hide their anger or soften it with melodic moments; the intensity of the music is perfectly accompanied by Alex’s voice. ‘Apaches’ is also really violent but in this song the screams are not leading it, in fact in some parts the voice sounds like another instrument and in the last minute the song is only instrumental, all the instruments vibrate with a special intensity, it’s hard to believe that they are only four musicians. ‘Petite Mort’ is another interlude, a little bit longer that ‘Ingénue’ but simpler; we only hear a couple notes of the guitar and distressing screams that collectively create a tense atmosphere which leads to ‘Cri de Coeur’, in this last song The Prestige show their talent at its fullest potential, the rhythm goes from fast, powerful melodies to slower ones in just seconds with exceptional coordination; the melodic parts are so mellow and the heavy moments get you involved in the strongest and desperate chaos.

In this album The Prestige shows that they have achieved the sound that fits them better and that the future of the band is very promising.

Oh, by the way, The Prestige will offer 4 concerts in the UK during December, they will be playing with Artemis in London, Stoke, Cheltenham and Basingstoke; more info can be found on their facebook page