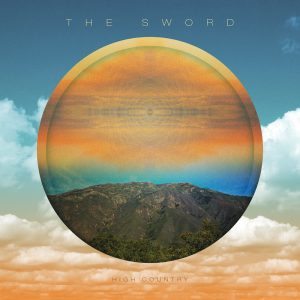 Evolution can be painful. This is especially true for artists working in a niche that tends to be something of an artistic cul-de-sac like stoner rock. When so many of your peers are happy to release records that sound exactly the same year on year, who are you to think you can just up and discover the existence of other sounds and other genres? When being in a band is your livelihood and you know you are going to alienate a chunk of your audience with no guarantee anyone is going to replace them, you have to ask yourself what’s more important – artistic expression, or financial security?

Whatever you make of The Sword‘s leap into the unknown you can’t accuse them of hedging their bets. Opener ‘Unicorn Farm’ is about the last thing people following them on from the muscular, meat-and-potatoes stoner rock of Apocryphon will expect to hear. It’s a slightly awkward electronic number that sounds oddly like the music from the infamous, “You wouldn’t steal a…” FBI piracy warning that terrorised DVD watchers for years. It seems designed to mess with people’s expectations and lead to a thousand, “what the hell is this?!” moments for anyone who dares to turn up to a party with High Country in tow. But it’s a false start – just over a minute later ‘Empty Temples’ is on and the rock is back.

Only it’s not the breed of rock you might expect. It’s much cleaner and warmer than the hypnotic riff battery of their earlier efforts. Soft cooing backing vocals drifting in and out. The guitars don’t go for the jugular – they’re channelling Thin Lizzy more than Black Sabbath, working with big, ringing power chords and relying on the vocals of J.D. Cronise to drive things forward. I doubt anyone would have picked the vocals as their favourite element of The Sword in the past but on High Country he shows a surprising range. Gone are the generic fantasy lyrics too – replaced with a mix of more grounded tales and vaguely hippyish peace and love fare. After four records of straight forward head nodding stoner fury it sounds a world apart from The Sword we’ve come to know.

But once the initial surprise wears off you realise this isn’t all that radical a change as it seems. It’s more a shifting of influences than a reinvention – and crucially it feels entirely natural. It makes sense that these Texas boys would eventually let the Southern-fried rock they must have been surrounded by growing up seep in through their pores – on ‘Tears Like Diamonds’ they sound like a little Creedence, on ‘The Dreamthieves’ a little like ZZ Top. And there’s more of an emphasis on groove on display, with the title track and ‘Buzzards’ both sound like Blast Tyrant era Clutch, which isn’t a million miles from the wheelhouse in which they used to operate. The major difference is how much fun they seem to be having, as if throwing off the shackles of genre restrictions has given them a new lease of life.

This shedding of old skin does take them down some more surprising avenues though. There’s a folk influence on ‘Mist and Shadow’ and ‘Dust’, which suits them well, with stomping acoustic guitars being added to their repertoire. And then there’s the electronic numbers at the records heart that show that they weren’t bluffing with that opener. Instrumental ‘Agartha’ sounds like something trimmed off of Portishead’s Third for not being up to scratch and leads into the record’s big left turn – ‘Seriously Mysterious’, an electro funk number that’s reminiscent of Sub Pop’s sole grunge era electronic outfit Pigeonhed. The squelchy synths they used sounded dated in the early 90s and time has not been kind to them. They somehow almost manage to pull it off but as impressive as Cronise is elsewhere here his vocals aren’t strong enough to carry it – as an experiment it’s not a complete failure but should probably have been left on his hard-drive.

They follow that with the slightly self-conscious NWOBH style instrumental piece ‘Suffer No Fools’, the one moment on the record where they sound like they’re worried they’ve gone too far. But they needn’t have feared – there’s more than enough guitar worship to go around, only with the big, brash riffs of old replaced with more dextrous, playful guitar lines. ‘Early Snow’ highlights an interesting parallel, sounding as it does like mid 90s Corrosion of Conformity, with Cronise’s affected low vocals a dead ringer for Pepper Keenan’s. CoC’s own transition from thrash metal to southern rock a decade into their career seemed similarly blasphemous at the time. For them it lead to their most commercially successful period of their career. Time will tell if The Sword are as lucky – though when CoC made the change they perhaps had less to lose.

At 15 tracks High Country is needlessly lengthy – it feels as if they’ve been bottling this stuff up so long it just had to get out. But not every idea they chased down needed to be included on the record. Detractors will use this shift in direction as proof positive that The Sword are the fakes they had them pegged as way back on Age of Winters, and for some their new sound will not meet their acceptable minimum heaviosity levels. But it would take a narrow mind not to realise that on High Country The Sword have never sounded more free or more alive. It’s a bright and occasionally brilliant reinvention of the band that draws deeply from a much wider range of influences and makes this second phase of the band a more interesting and more complete proposition than the first. Evolution can be painful – but the trick The Sword have pulled here is making it seem as difficult as kicking back, opening a beer, dusting off a few old long neglected records and rediscovering how much you loved them back before you learned to worry about genre.