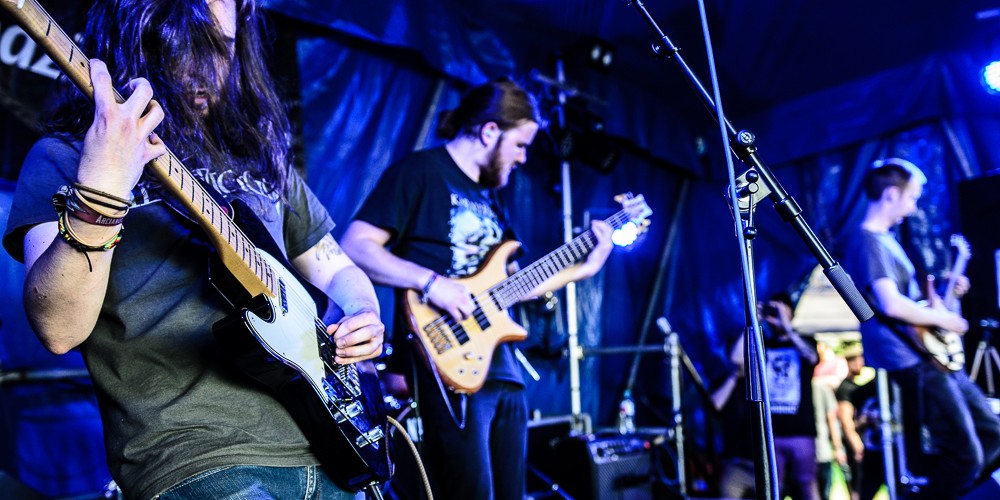 On a very damp Saturday afternoon at ArcTangent we ambush interviewed Rory and Sam from festival first timers Eschar.

Rory: It was honestly the best experience. I just had the best time. I was really worried about how many people were going to turn up or whatever but a lot people came – more than we expected. There were people outside the tent. They weren’t just wanderers, were they? They were actually there watching, which was great. It sounded great onstage, great reception… I just had the best time!

Sam: Yeah. It was new territory to a certain degree, so we were a bit nervous but once we got into the first song and saw how many people were there, the atmosphere was great and we really got into it and we had such a good time.

Rory: We had, like, five cameras set up as well. We had a couple of mates going round, you know, and we had sound out of the desk so hopefully we’ll be able to make something really good out of it as well.

Rory: Every year. I have.

Sam: This is my first time at Arctangent, actually. 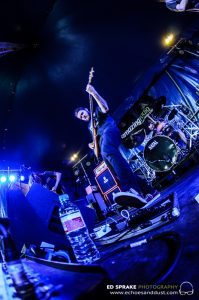 Rory: Honestly, it’s just the selection of bands are second to none. And because I don’t go to… you know, when you’re a teenager you go to Download, you go to Sonisphere, you go to these bigger festivals and this is one of the only festivals I go to any more because it’s one of the only festivals you go and it’s, like “Shit, oh God I need to run over to this stage…oh God, I need to run over to this stage”, there’s no letting up because every band is great – just the selection is incredible, the whole set-up and vibe…it’s a really good atmosphere.

Rory: Honestly, I wouldn’t say so. I think it’s more spurred us on, we really wanted to play. I mean, I know that we would fit here.

Sam: To a certain degree, yeah, we’ve sort of gone “This is somewhere where perhaps we fit in quite well, so perhaps we should aim to do this” and we really pushed it.

Rory: Best thing was, they approached us this year, which was excellent, so that was really nice.

(((o))): (D) One thing we were remarking on when we were watching you was, compared to the first time we saw you – three or four years ago probably – you just seem to have matured a huge amount as a band. it’s amazing to watch. I think Arctangent has really pushed bands in this scene to do better, to be better, because they want to be on these stages.

Sam: The post-rock and prog thing has always been underground, it’s had a following, you know but it’s kind of a cult following. You come somewhere like this and it feels like something real…you know, it’s everywhere and it makes it seem a lot more real.

Rory: And that’s an incredible thing – in and of itself, the fact that there is a festival that’s in its third year running and it’s successful and it’s catered to that kind of music, you know. It’s incredible – that is an amazing thing and I think is a real testament to the passion of the kind of people that listen to this kind of music. I think that is just amazing. 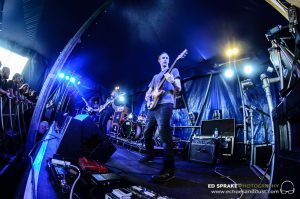 (((o))): (H) Yeah. I mean, people are coming from all over the world to be in this field this weekend

Rory: I was chatting to this great Swedish guy – I unfortunately can’t remember his name – and he was like “Oh yeah, I’ve just come over from Sweden” and it was really weird, we were watching Talons and I went and stood next to him and he’d watched our set. So, out of everyone I could’ve stood next to, he came to check us out and he loved it and, you know, that was just a guy who’d come over from Sweden to have a great time and just was really passionate about the music.

Sam: Nova took a long time to come out and we really had to push. Once we got the momentum going it was good but once it was out I think the creative juices were really flowing and I think kind of post release we just carried on writing

Rory: Yeah, that’s it for me. Nova, .I’m really proud of it – we had to pull some of that out kicking and screaming because it was kind of great but we’ve gone to a different tuning, dropped it. It’s a bit heavier. Not like a metal sense but just in a bottom end kind of sense, and the riffs are flying now and the creative juices are definitely flowing. Europe is what is, like, the main… A Europe tour is what we are working on now so that is near future – that is going to be the next goal.