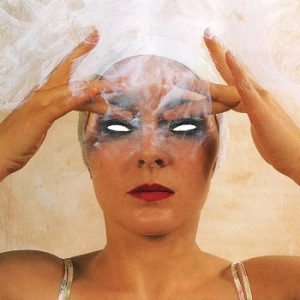 Released on October 2, 2015 via Rocket Recordings

So what do you do when you have already released one of the albums of the year? Do you sit back and enjoy the critical acclaim? Do you carry on as normal and tour the back out of it? In Hey Colossus‘ world you pretty much ignore all that and get on with business as usual. Which means that barely a few months after the release of In Black and Gold we have another album and not just a stop gap either. Radio Static High not only counts as a brand new album but also a completely different sound from the last one. It really shouldn’t happen…but it has.

In Black and Gold traded itself on some of the more out there psych moments of the year as its guitars and vocals travailed paths which threatened to open up parts of the universe, which should be left well alone. In contrast Radio Static High is a much more immediate album, which channels the post punk sound of Wire and funnels it down a krautrock highway giving it an almost tetchy and jerky feel as it seeks out new rhythms. There’s almost a Talking Heads Fear Of Music feel to it in parts, which shows how far the music has travelled from their last one.

It gets off to an inauspicious start with the title track, but once ‘March Of The Headaches’ kicks in, the less than subtle guitars jerk you out of the monotonous reverie to startle you into realising that you are listening to a completely different beast than In Black and Gold. Amazingly this is a bit of a red herring though and it’s only in ‘Hop The Railings’ that you get the true essence of the album as it’s jerky rhythm calls to mind those latter day post-punk greats.

‘Memories of Wonder’ is another trip out of the norm as its complete breakdown of what music is supposed to sound like evokes a calm within the storm. It’s a moment of reflection, but also one of anticipation as you start to wonder just what the second half of this album contains.

‘Snapping Undone’ again channels the urgency of an old Wire song although its repetitiveness does get a bit too much after a while. Better is the spaghetti western sounding ‘Another Head’, which thrives on a dark blues sound and drawled vocals. Unlike anything that has gone before, it also makes complete sense on an album which is increasingly sounding disparate yet complete.

There’s a slight trailing off towards the end of this album as ‘The Mourning Gong’ doesn’t really add anything to the mix. ‘Hesitation Time’ is a majestic slab of rock and roll though and reminds us of what we expect from Hey Colossus. ‘Honey’ continues with its almost T-Rex sounding opening signalling what can only be described as a celebratory end to an album of many delights and we are left with the feeling that the band may have delivered something of a flawed masterpiece.

Taking into consideration its at times schizophrenic jumping of styles, Hey Colossus have delivered something of a marvel and whilst it may not match the near perfection of In Black and Gold, it demonstrates a fearless band who have no desire to sit still. Rock and roll is severely lacking in bands of this calibre and if it is up to Hey Colossus to be the standard bearer then we couldn’t be in better hand. It’s not perfect by a long shot and there are a couple of filler tracks, but on the while this is something of a remarkable album made even more so when you consider it is their second of the year. Here’s to the next release most probably coming soon!