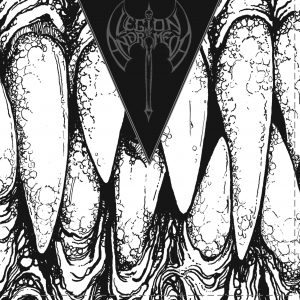 Following up from there mighty impressive 2013 demo, Japanese thesaurus botherers and ear drum rattlers Legion Of Andromeda return with a full-length release of sonic disintegration in the form of Iron Scorn and you’ll be pleased/horrified (delete as applicable) to find they have picked up EXACTLY where they left off with unabashed abandon.

So yes all seven tracks and 42 minutes stick rigidly to the cyclical death/doom formula complete with the hypnotic blacksmith chimes pounding away on a never changing rhythm, while an extra dose of treacle has been poured into the production mix somehow making it sound even filthier and heavier!

Three of the four tracks from said demo have been carried over, refined and retuned however ‘Fist of The Galaxy’ has been thrown against the wall and shot for having the audacity to entertain a tempo change.

The delightfully monikered ‘Transuranic Ejaculation’ kicks of proceedings and gets straight to work delving into the unrelenting, nihilistic, grinding simple yet effective riffs, which are partnered with equally squalid growled almost indecipherable vocals on the same frequency. Combined with the afore mentioned chimes cultivate a deepening sense of claustrophobia and time deprivation especially when the entire composition is “enjoyed” in one sitting.

As I have mentioned before they are not an outfit that dabbles in variation, and why would they when it works to such incredible affect.