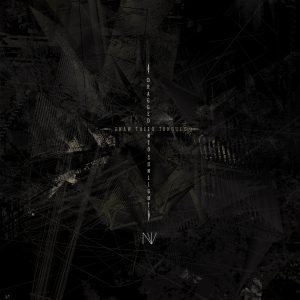 Released on November 13, 2015 via Prosthetic Records

Dragged Into Sunlight have garnered themselves a solid place in extreme metal over the past few years and for good reason, never afraid to experiment with noise Terminal Aggressor, death/doom/black metal Hatred For Mankind and more ambient/post-rock influences Widowmaker. No matter what though, the band keeps its music dark, frightening and heavy.

On N.V., Dragged Into Sunlight don’t stray too far from the path they went down on in Hatred For Mankind, but since it is a collaborative effort with Gnaw Their Tongues, Mories’ influence is pretty clear here (especially after experiencing the latest GTT release Abyss of Longing Throats and adds another dimension to the sound. It’s murderous.

This is clear from the get-go with the first track ‘Visceral Repulsion’, which was dropped online a few years back but taken off the internet as fast as it appeared. The industrial vibe is especially strong on this one, thanks to its distorted intro and the underlying horns and noise underneath the main instrumentation, as well as the signature dramatic synth sounds of Mories. But the Dragged Into Sunlight’s setup means that the song is structured and flowing. Imagine Author & Punisher meets blackened death metal. If you like that, then this is more than likely down your alley.

‘Absolver’ is a mechanical death metal beast with its tightly synched drums and guitars, with the usual nightmarish vocals tortured in its cogs. Just over the halfway point, the machine basically stops and falls into an ambient/drone atmosphere, again, featuring a sample of a man describing an execution with a gun, but soon jumps into another version of the earlier death metal sway.

The next, ‘Strangled with the Cord’, opens up where the final track on Hatred For Mankind left off, but it doesn’t take long for the humming drone-noise and feedback to unfurl into a doom passage before unleashing that blackened death style again. The echoed vocals – screams and retches – are muddied in the mix and work extremely well. The result is pure sonic filth and insanity.

‘Omniscienza’ is probably the most straightforward of them all. Again, there’s that blackened death worship with a bit of an Entombed feel with the main riff. There’s not much else to say than that, it’d fit on Hatred For Mankind easily if it wasn’t for the different production style.

The finale comes as ‘Alchemy in the Subyear’ returns to noise influences, but with purer black metal tendencies – this is where the mix of Dragged Into Sunlight and Mories equally thrive. The track ends with a really sombre outro, sounding like each member are on their last legs, finally drained after the aural beating they’ve given.

N.V. is a nasty experience, a soundtrack to human suffering. While personally it does feel like samples of murderers are a little saturated on this album, it doesn’t hinder the flow of it – it’s just that you don’t get so much time to digest what’s being said as on Hatred For Mankind or a Gnaw Their Tongues release. This is a minor thing, otherwise the only way this journey could be better is hearing it live.

An(other) intense release by two of Europe’s most punishing bands.