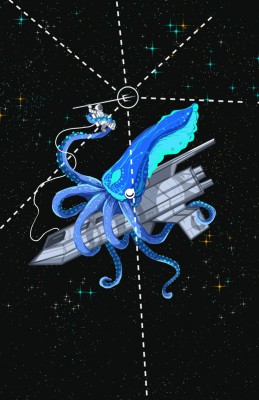 When there’s only a handful of notable bands, it’s not too terribly difficult to say any one band is the best when it comes to my hometown, Boise, Idaho. Red Hands Black Feet (RHBF) are definitely the best of Boise. While that may be comparing them to the principal of a home school, it’s just how much better RHBF are that makes it truly impressive.

The album dropped on Bandcamp the morning before the album release party, so I was fortunate enough to have it fresh in my mind when I had a chat with the 1st guitarist, Eric Larson before the show.

(((o))): Did you think Red Hands Black Feet would survive the lineup change between the two albums?

Eric: Yeah, there was never any doubt. Our previous drummer almost couldn’t go on our last tour with us, so there was a period when we were looking for someone. Our tour was mostly booked, so we were looking around thinking “Who could we get to play this tour?” and when she decided to leave after the tour, we already had a list of people in mind that we would be willing to live in a van with. Matt was on that list.

Eric: I think we were working on it before we released the first one. So, somewhere between three and four years. [laughs] A lot of that time we had it written and put off recording in order to go on tour. And since we do everything ourselves, mostly it’s just time consuming, and we all work, and all that. We can’t really do a lot of different things at the same time. It’s been a process of writing a bunch of stuff and letting it marinate, and doing other things, and coming back to it. And then over time got this… thing we’re releasing tonight. [laughs]

Eric: I think it is so much better. I’m really happy with how it came out. Just the way we wrote it all as one big piece, and wrote songs certain ways to fill gaps in the overall structure a certain way. So I think that overall as an album it flows better, and the songs are more thoughtfully composed, and I think we do a good balance between your sort of predictable 3rd wave post-rock, and using that to our advantage to do things that you don’t expect to happen within those songs.

(((o))): What did you guys listen to while making this album, did it influence you guys at all?

Eric: Yeah, there were a few post-rock bands like Braveyoung and This Will Destroy You that had a pretty big impact, but there were some other bands I’ve been getting a lot of inspiration from like City of Caterpillar, and we had a really big metal [phase], which I think lead to a lot of things getting heavier and louder. I’ve found a lot of the people who like us are metalheads.

(((o))): How do you feel about being a post-rock band in such an obscure area?

Eric: It is a double-edged sword, to be sure. There is not a lot of bands in town who do this, it kind of gives us an advantage as far as staying ‘fresh’ within Boise, but at the same time there are not a ton of people here who are initiated to the whole post-rock thing.

(((o))): Or people who have been initiated, but haven’t bothered to check for local bands.

Eric: Exactly. A lot of people ask what we do, and I have to ask “Have you ever heard of Explosions In The Sky” and lately the answer has been ‘No’ a frustrating amount of times. [laughs] So then I have to go into a much longer description, and by then I think they’re checked out [mentally], they don’t care anymore

(((o))): Where do you think this band is headed, after releasing this album?

Eric: Well, we’ve already started writing the next one, so we’ve got a rough idea for the concept, and some sounds put together. I think we’re just going to keep making music and trying to get other people to listen to the music we make. If we could wind up making a living at it, that would be fantastic. But that would be a long shot.

Eric: No. We’ve looked into possibly relocating… Depending on the reception of this album, and our ability as a group to come together and be more organized in the way we approach running the band. Right now we’re trying to just make it sustain itself. It doesn’t have to pay all of our bills, but if could not cause us to haemorrhage money the way it has in the past, then I think that would be great for us, and allow us to move forward more easily in the future, and build momentum.

(((o))): You mentioned relocating. Where would you want to relocate to?

Eric: The top of the list is always like Seattle, Portland, and the bay area. I think we all had a lot of fun in LA on tour last year. We’re not looking at it as an imminent possibility right now. I guess really anywhere we would find inspiring. We’ve also kicked around the idea of possibility relocating temporarily to a rural location and buckling down and crank out a new album. That takes a lot of getting your shit together.

The concert itself was extraordinary. It was started by a local band Trite who had released their two-part album earlier this year. They did a superb job at getting the crowd excited and hyped for Red Hands Black Feet. They were a lot of fun, even inviting the crowd to sing along with them when they finished their set with a cover. Their music wasn’t the most amazing or complex music ever, but it was loud, fun, and perfect for dancing to at a concert.

Seattle band GEMS really surprised everyone with a solid sound comprised of two synths and two drummers. It worked remarkably well and was very popular with the crowd, especially since I don’t think anyone came to the concert to specifically see them. I talked with them after the concert, they’re super nice folks, very down-to-earth people who definitely deserve some attention.

Red Hands Black Feet took the stage and opened with the single they released in August ‘I Leave You and the Earth Behind’ which starts with all four members blasting away on their respective instruments for a good two minutes. They received a standing ovation and they weren’t even five minutes into their set.

The night continued in the same manner, every song prompted the crowd to roar with applause. Everyone was entranced with the performance, and there was a refreshing lack of phones in the air. It made it easier to focus on the band’s passionate display of expertise. The bassist was so intense, his glasses fell off almost immediately after starting, and I don’t think he even noticed.

After the encore, everyone in the club looked like they were glowing. The venue was filled to the brim with friends surrounding the band members, laughter, praise, and smiling faces everywhere, including me. I don’t go to concerts all that often with work and family taking up almost the entirety of my time. But even if I did, I would still say this is the best concert this year. Possibly the best concert I’ve ever been to.