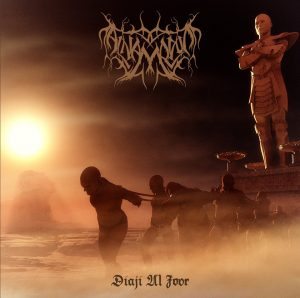 Released on November 27, 2015 via Shaytan Productions

There’s a lot going on behind the scenes with Al-Namrood (which translates as ‘Non Believer’) because Saudi Arabia is not the kind of place where you can start a black metal band. The people of Saudi Arabia have been living under a strict Islamic regime for decades and any action that is deemed to be un-Islamic can lead to a prison sentence or even execution. So this band record all their music in secret and release it through Canadian record label Shaytan Productions. They have never played a gig and they can’t even tell their family that they play in a band.

The first track of the album, ‘Dhaleen’, sets the scene with wind and crashing. We hear a mysterious ney (a type of flute) and some classical Arabic singing floating over the top. Then a sudden crash of Arabian instrumentation including qanun (a type of zither) and daruka (a drum with a tight sound) give a rich sound over this bleak backdrop.

‘Zamjara Alat’ creeps in with a slinky oud riff to lead into the metal. The song leads with a guitar riff that reflects off the folk instrumentation in a very clever way, then joined by vocals that, like the rest of the album, are in Arabic but in this song are delivered in a sharp metal style, which can sound quite theatrical. The song breaks into furious black metal; the mix of speed riffs and fast Arabic shouting leading its way into the sound of unnerving laughter. A powerful song to break us into sound of Al-Namrood.

‘Hawas Wa Thuar’ begins with wind and a mumbling whisper in true black metal style, then kicks into a discordant doom riff backed by an eerie reed instrument. As soon as the vocals start we get a more drawn-out Arabian groove backed by folk instrumentation.

‘Ejhaph’ contains an awesome percussive breakdown before it leads into an electric guitar riff to compete with the traditional instrumentation. The singing is very pronounced and rolling in this song, which is quite punk rock in style. The song ends with some interesting metallic percussion against droning metal.

‘Adghan’ comes charging in with a heavy slow doom riff backed by ney. The song has a moment of clarity with a qanun breakdown, but continues into the heady madness of its monster riff.

‘Ya Le Taasatekum’ comes back to the pure black metal. Brutal pounding drums followed by passionate vocals. Again I hear the laughter of the triumphant anarchy that this band possess. This song also contain a fiddle line reminiscent of European folk metal.

‘Hayat Al Khezea’ is the most epic song from the album and one the band have released as a music video depicting a rich Saudi prince type figure sentencing people to death whilst enjoying a snake dance by a lingerie-clad girl. The girl later lap dances for him in a hijab. Without being able understand the language, I guess they’re expressing the hypocrisy in the power elite and religious system in which they live. The music is hypnotic with a swirling quality and a manic edge, and ends with a ranting speech.

‘Ana Al Tughian’ continues with the doomy feel of the distorted Arabian riffs backed by percussive sounds and an exotic wind instrument. The middle eight brings back the black metal vocals to get out some final aggression. The album ends with ‘Alqab Ala Hajar’, an atmospheric instrumental of traditional sounds.

Al-Namrood have an incredible sound, raw yet technical with a sense of urgency which might reflect the stress of their recording environment. Their music is purposely anti-religious and against the system, which in their situation leads to great protest music and even better metal. Fans of Secret Chiefs 3 and Melechesh should check out this record.