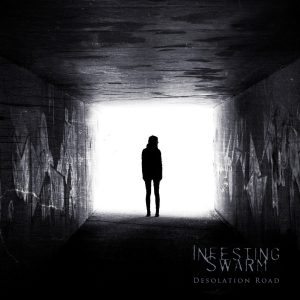 Desolation Road is the debut album of the German band Infesting Swarm. It is an album that contains elements of doom, death, black and post-metal that creates an atmospheric and melancholic sound.

The album begins with ‘Dead Transmission’, which is the typical atmospheric opening to ease you into the album and set the tone for what is to come. The track is aptly named as the listener will hear what sounds like a dead radio transmission in a post-apocalyptic world. The next track ‘Ending’ begins slowly before it begins to speed up and then slows down again. This is the structure of the track until we get an acoustic break down around four minutes in that leads to the conclusion. It is an epic, heavy track that features black metal vocals and it starts the album of strongly. ‘Desperation’ follows on from this well as it combines various elements into one epic track.

‘Year of No Light’, the next track, signals a change of direction within the album as it becomes lighter and more melodic. This trend continues with the excellent ‘Abandoned Life’ that interweaves strong melodies with elements of doom to great effect. ‘Der Lauf Der Zeit’ is next and it begins acoustically before the band takes over and continues as it has previously. ‘Horizon on Fire’ is next before the title track closes the album. ‘Desolation Road’ begins acoustically and slowly brings in what sounds like another transmission with a barely audible spoken track in the background with distorted guitars. The acoustic guitar then comes back in again and the track builds up to the rest of the band coming back in to close the album out. Desolation Road is an excellent debut for Infesting Swarm and shows the potential the band has going forward.