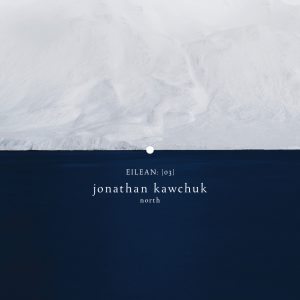 Released on December 12, 2015 via Eilean Records

The minimalistic artwork of record North by Jonathan Kawchuk in white and blue reveals an 8-track album composed at various Nordic corners of mother Earth – Canada, Iceland, Norway and those which are perceived as warmer places – Israel, Portugal. This geotag variety subconsciously leads and results in a whole-world, non-traditional, contemporary sound.

North seems like one entire soundscape and really makes the atmosphere like hm, air in wild life. Like the wind it has changes, lead motives, pause elements (‘Aware’, ‘Fast Twitch’). The instrumental album actually starts with some laughter and human-produced noise, but pianos and female vocalising quickly distinguish white noise and self-turned vector of music play.

I’d like to emphasize ‘That So’, featuring Nadia Sirota, a great neo-classical work with beautiful and dramatic viola. The grandness of the bow sounds reminds me of zenith times when nature works at extreme intensity. Piano gently humidifies the sound and makes it more mobile. A little final speed-up ends with a drum smash like that fast and early winter sunset, leaving us in ambient sound and emotional confusion for the rest of the tracks.

Winter is treated in many different ways – mostly negative with mud, darkness and cold, but Kawchuk tends to be one who finds admiration and beauty in it with this album. To dilute the gloomy and obscure atmosphere before, during and after New Year parties, this record will be perfect.