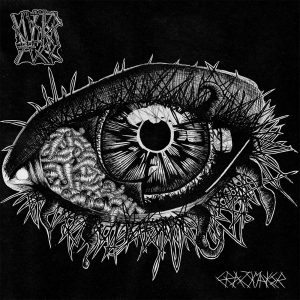 Released on December 13, 2015 via Wooaaargh records

Copenhagen’s Kluster Fuck play the kind of grindcore and powerviolence mixed in with some crust punk and d-beat for good measure that is for any fan of blasts of noise that are over in less than a minute. Think Scum era Napalm Death or Infest. These are abrasive blasts with the added bonus of some insane shrieking female vocals that have to be heard to be believed, such is the anguish, spite and hatred in which the vocals are delivered and this makes them stand out from bands who crank out the same type of music.

With Crazymaker, the band blast through 20 songs in 14 minutes without any let up in their unrelenting sound and although at times the songs can sound a little too similar, when they are as unrelenting as they are it doesn’t seem to matter at all and the whole of the album is over before you know it, just the way it should be. This is punishing music that is fast, harsh and crazed.

Highlights on Crazymaker include the full on ‘Blame The Horse’, a song that starts with a intimidating and brooding doom like intro before the demented grind violence takes things over, the completely vicious crust punk of  ‘Too Late To Hate’, the sheer blitzkrieg of the album’s title track, the grinding ‘Face Fell Off’ and the dementedly titled and completely off the hinge powerviolence of ‘The Kitchen Is Absolutely Brutal’, a song that features some pummelling riffs and screams so harsh they could melt your face.

Kluster Fuck are aptly named due to the destructive and chaotic nature that their music takes and Crazymaker can be summed up in three words with the title of one of the songs on here, Fast As Fuck!