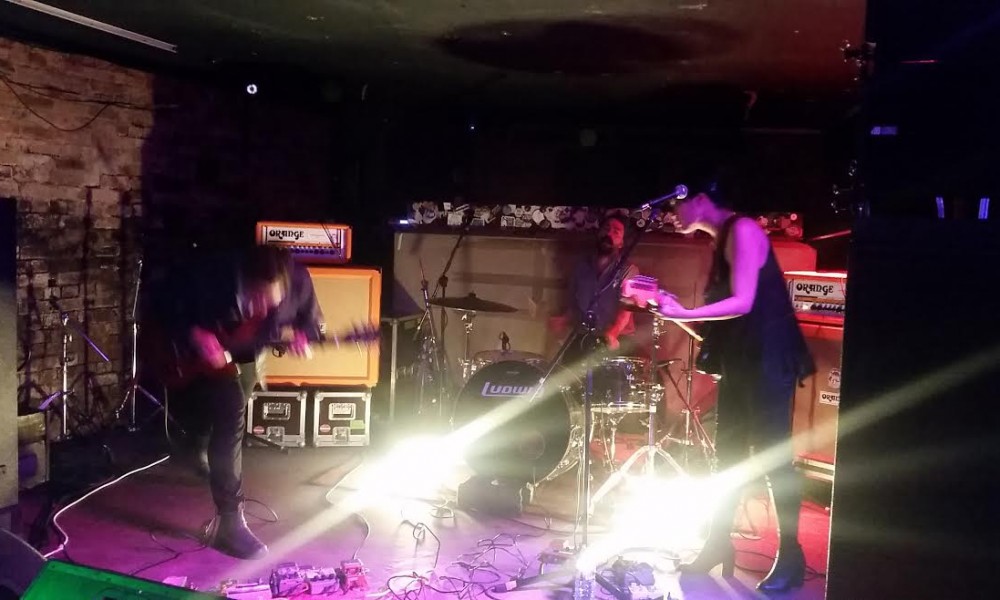 I’d heard of Soden, the first act tonight, before the gig but I’d never listened to them. Even though there was only a small group of us watching, their riffy instrumental psych-rock was more interesting than I expected. Expert use of wah and a number of interesting and unexpected drum fills made for a complicated but satisfying support act experience. If forced to describe their sound at gunpoint, I’d liken them to Ten Foot Wizard, but without vocals. They were great and only young lads, so keep an eye out for them.

Kroh were slightly more polished, and had another sound entirely – more gothic, seductive, slightly weightier. Their brand of doom consisted of thick, meaty tones accompanying Oliwia Sobieszek’s angelic, dirgey vocals, incorporating lots of sustained notes and mournful tones into an extremely heavy sound. There was a few more in the crowd as this point so they as a band had slightly more energy to work with, which was reflected in their intense and commanding performance. It’s great that Birmingham is still producing bands like this, into 2016.

Of course most of us were there for Big|Brave, and they didn’t disappoint. I’ve had Au De La pretty much on repeat all week and they stuck solidly to material from it, possibly signifying that their well-deserved signing to Southern Lord was something of a rebirth for the band. They stand out amongst the usual sludgey d-beat that the label peddles as a more experimental prospect, with Robin Wattie’s mournful, angsty vocals existing in stark contrast to the wall of noise she and fellow guitarist Mathieu Ball create, all the while tempered and controlled by Louis-Alexandre Beauregard’s never-breaking rhythm.

They’re interesting because all three of them play their respective instruments as percussionists, each counting the other two in at different points throughout the set, all the while maintaining a pulsing beat amidst the swirling, disjointed noise. Seeing them playing the songs right there, in front of you, and it sounding exactly like it does on record but also vibrant, loud, and live, you forget that bands like this, who experiment and play with uneven structures and off-kilter timing, know what the fuck they’re doing. The way Ball controlled his feedback and played it off the steady, grinding, pounding rhythm Wattie and Beauregard created was extremely impressive – that they can not only perform the songs but put on an actual performance, with concessions to theatre and magnetic stage presence, is rare so early in their career.

They make music that is just within the bounds of rock, without veering off into what might be seen as self-indulgent if you’re not into that sort of thing. They’re an excellent gateway band into experimental rock as well as a fantastic band in their own right, and they’ve only been going three years. I can’t wait to see where they go from here, and I feel privileged to have seen them in such a great little venue.