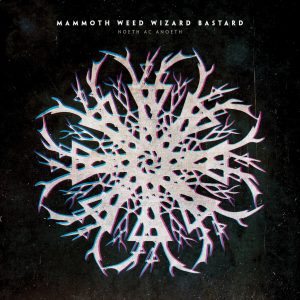 First, the elephant in the room must be addressed. Yes, Mammoth Weed Wizard Bastard have a bloody silly name. It’s like they resorted to using a comical online stoner doom band name generator, or like they can’t quite work out themselves if they are legitimately out of their skulls or attempting to poke fun at the whole thing and in turn cannot decide whether it’s a real jab or a loving parody. It’s a name that will attract as many people who want a giggle as it will turn off others who want something more serious. One listen to Noeth ac Anoeth though and it seems both camps will be in for a surprise as while the band are clearly not afraid to laugh at themselves and the scene they’ve arisen from, this is not only a thoroughly credible doom release, but a downright interesting one.

Sonically Mammoth Weed Wizard Bastard (let’s just call them Mammoth from here on yeah?) draw a lot from the well-established templates set out by likes of Electric Wizard, Ufomammut and the other usual stoner doom suspects, but happily don’t go as far as crossing the line adding to the sea of what are practically Electric Wizard tribute acts, doing some interesting things with the raw materials they’ve chosen. Noeth ac Anoeth clocks it at over fifty minutes in just three tracks, the final of which takes up a mammoth (excuse us) thirty of those. As you might expect they spend significant amounts of this time locking into a hypnotic groove and decimating whatever speaker system their unyieldingly heavy riffs happen to be oozing out of. They perhaps stretch themselves a little too far with keeping these fully engaging one hundred percent of the time, but they do continue to hammer them out in a pretty undeniable fashion with riffs that frequently hit harder than what many other bands of this ilk manage to come up with in all three tracks. The thirty minute finale ‘Nachthexen’ might not contain the heftiest individual standout riff, but as its length would suggest certainly contains the most twists and turns, from leering sluggish death crawls to relatively upbeat stomps via various quieter passages. This is most notable in the two minute or so melodic bass intro that provides one of the most emotionally introspective moments of the record, like sitting in the corner of a dank cave illuminated only by the flecks of light reflecting off droplets of a stream providing the one hope of continued life.

Meanwhile what the press releases describe as Mammoth’s “secret weapon” is entirely on the money. Jessica Ball’s voice really is the one aspect that lifts this record from a competent display to something mesmeric and spine-tingling. The ethereal angel fronting a pummelling caveman band is not a new concept, but it’s not often as beautifully executed as it is here. When she emerges through the haze first during ‘Les Paradis Artificiels’ it’s a real sit up and take notice moment, which only elevates during the chorus, the layering of different tracks creating the impression of a whole irresistible choir compelling the listener to wade further into the gloom with sickly promises.

For a debut album, Noeth ac Anoeth is a very promising start for an outfit who have managed to craft their own sound right out of the gate with less than twelve months together as a band. What is more exciting is the room for them to grow; hopefully they do not just solely peddle the pretty vocal/ugly music trick without going anywhere new and instead continue to expand their sonic palette as they do on moments peppered throughout this release. As it is Mammoth Weed Wizard Bastard are more entrancing a proposition than a band with that name have any right to be, and Noeth ac Anoeth is a captivating space to lose yourself within.