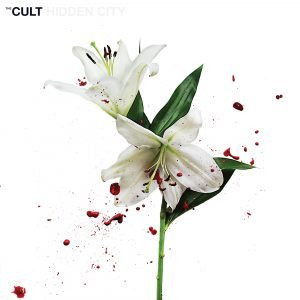 Released on February 5, 2016 via New Wilderness

The Cult are one of the most iconic rock bands to emerge from the ‘80’s. Their biggest hit, ‘She Sells Sanctuary’, is a staple on national radio still. However, the band with singer Ian Astbury and guitarist Billy Duffy, is so much more than just another weird gothic rock meets post-punk novelty act from yesteryear. Frankly, albums like Beyond Good And Evil (2001) and Choice Of Weapon (2012) are just vibrant and relevant as their famed 80’s output like Electric (1987) and Sonic Temple (1989).

So let’s dispense of the history lesson here and move on to the present. Hidden City, the band’s tenth studio album, is quite a mesmerizing journey and a solid closure for a trilogy of records rounded out by Born Into This (2007) and the earlier mentioned Choice Of Weapon (2012). The band’s new album is by far the most layered of the three with Billy Duffy’s guitar playing taking on a more prominent role. Songs like ‘Deeply Ordered Chaos’ and ‘Birds Of Paradise’ are poignant examples of this new approach.

Another notable difference is the jam-based rock and roll feel, which characterises tracks ‘Dark Energy’ and ‘Hinterland’. Both are hard driving songs in the best The Cult tradition, but their more groove-oriented approach gives them a surprising surf rock type of disposition. The same goes for ‘No Love Lost’ and ‘Dance The Night’. Hidden City also harbours more poppy moments in the form ‘In Blood’ and the fragile ‘Sound Of Fury’. The latter song sees Ian Astbury crooning along with the best of them.

Of course, Astbury’s voice isn’t what it used to be, but he knows and understands its strengths and weaknesses. Moreover, his distinct baritone wail is half of what sets The Cult apart from its peers with Duffy’s understated playing forming the other half. It’s his voice that gives Hidden City its ragged edge in very much the same vein as David Bowie’s vocals on Blackstar.

Hidden City isn’t as accessible as to the previous two albums. It’s a very layered musical endeavour and it doesn’t feature any typical hit songs. However, after a couple of spins the album will grab your imagination and you’ll get hooked by its seductive nature. Hidden City by The Cult sees the band playing to their strengths and it’s a mighty fine addition to their ongoing legacy.