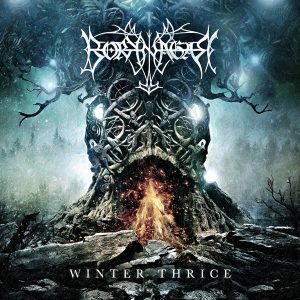 Winter Thrice is the tenth album by long-standing Norwegian metal band Borknagar. Starting off as a melodic black metal band in 1996, their sound has been expanding for many years into areas of folk metal, prog, 70s classic rock whilst retaining their black metal roots. To celebrate their 20 year career, song writer and founding guitarist Øystein G. Brun has put together an epic album of new material that includes all singers from Borknagar, past and present. Long-standing members Vintersorg, Lars A Nedland, ICS Vortex and original singer Kristoffer Rygg (Ulver) all appear, capturing the band’s different musical eras while also pushing their sound forward into newer grounds.

Intro track, ‘The Rhymes of the Mountains’, is the classic Borknager sound with pounding rhythms, jangly guitar riff with folky sung verses backed by aggressive screaming black metal and a catchy harmonious chorus with lyrics revolving around nature, paganism and the Norwegian landscapes. Amongst the madness they still retain a classic metal edge.

Title track ‘Winter Thrice’ brings newer sounds to the album. All four singers feature on this song including Kristoffer Rygg giving an unexpected lead crooning role. Song-wise this is one of Borknagar’s biggest tunes in a long time. It gives all the elements of Borknagar’s sound but pushes it to soaring pop heights. However it still keeps the black metal edge in Vintersorg’s vocal sections. The song leads into a crescendo of “the reigning union of nature” giving images of grand landscapes.

‘Cold Runs the River’ starts with a black metal sound with creeping synth bursting into some passionate classic metal vocals. Next track, ‘Panorama’, is the most 70s prog sounding song on the album with its big organ sounds and erratic drums. Lyrically this song talks of landscapes, structures and architectural design. Expressing the wonders of nature in an urban renewal scenario seems to be the theme. The song leads into a midsection of draw out riffs and synth sound to a massive harmonious chorus.

‘When Chaos Call’ begins with a rousing piano sound then bursts into clean metal vocals, which lead into a growling vocal. A turnaround (for the better) comes in the midsection, which leads into epic swirling multi vocal harmonies backed by black metal vocals.

‘Erodent’ brings all the elements back together. Big chorus, clean vocals with a folky edge. Black metal with pounding drums. Next track, ‘Noctilucent’, brings the progressive back into the album with its long intro leading into rousing clean vocal chorus. This song doesn’t have verses but instead we get instrumental sections and a guitar solo. It has a laid back feel which gives a new depth to the album.

Final track, ‘Terminus’, begins with aggressive black metal speed and vocals. This pans out into clean vocals leading into clean guitars, again all four singers feature, and then a return to the brutal madness. This song goes through many rhythmic sections. The chorus features a call and response between clean and grim vocals, and the songs ends with an epic rousing singalong.

Winter Thrice comes across as Borknagar’s most polished album to date; the song writing is excellent. There is an energy that reminds me of earlier albums like The Archaic Course, which I’m sure the fans will appreciate. It isn’t as overtly experimental as albums like Universal, however it does have its unexpected moments, which make it an enjoyable listen.