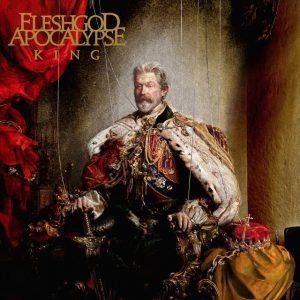 Snappily dressed Italians who deal in symphonic death metal, Fleshgod Apocalypse, have been on roll following their breakthrough second album Agony and colossal follow up Labyrinth, dazzling onlookers abound with fretboard wizardry and operatic bombast by the truckload (their Bloodstock 2015 show was really something else!!). New album King shows no sign of that abating.

Once again we are in concept album territory and in this instance “King is about an old world that is slowly coming to an end,” that is one part mythology and one part social commentary. As for the music itself, while they stick to the base template of technical death metal riffing and classical orchestra overtones, King is a far more expansive and varied beast than the customary brick to the face (this is a compliment by the way) approach of previous works.

As demonstrated when regular contributor of female operatic vocals Veronica Bordacchini is given the floor for a superb solo performance in ‘Paramour’ with just a piano backing or the elegant yet characterful piano work in the instrumental title track that closes out.

Not that they have left the full blown blasting in the locker as there is plenty of that to enjoy, expectation is given a jolt courtesy of the rather epic overblown intro ‘Marche Royale, the marching drum pattern and orchestral work building in drama and momentum leading perfectly into the opening track proper ‘In Aeternum’, which brings in rumbling death metal and barked vocals to proceedings. As always with Fleshgod, rather than bolting on the symphonic element, they are spliced into the very fabric of the music as strings, brass and choirs interweave amongst the drums guitars, vocals and tempo of the songs and often take centre stage, even on ‘Healing Through War’ when the chugging RIFFS are at their heaviest, the threading classical elements are a perfect compliment.

Even the ‘flight of the bumblebees’ style piano line and parping almost comical trumpets that make themselves known amongst the brutal riffing of ‘The Fool’ feel perfectly natural, but that’s not to say the band themselves are one trick ponies when it comes to the metal. Yes there is the technical riffing and barked growls as expected, but they also switch up the tempo both in guitar work and vocals such as with progressive and doom tinged flourishes and clean vocal passages in ‘Cold As Perfection’, which also features are star turn form the afore mention opera singer and glorious OTT 80’s guitar solo. The latter is nicely counterbalanced by the buzzing Slayer style solo in ‘Mitra’ and the overwrought emotional solo in ‘And The Vulture Beholds’, which also features some very high pitched male vocal ranges and tinges of Insomnium style “melo death” passages.

‘A Millions Deaths’ trumps all the myriad moments seen so far to be my highlight of the album as it seamlessly combines all the various elements on show into one epic display all while barrelling along at barely restrained full throttle into a stunning climax.

This is a true work of art in songwriting execution of a band at the top of their game and imagination.