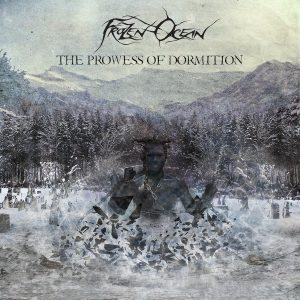 Frozen Ocean was founded in 2005. It is the creation of one man from Russia, Vaarwel. He has released a number of albums, EPs and splits under a variety of labels. This is the first release on Apocalyptic Witchcraft Records who claim to seek out the most creative and independently minded of artists, which can be seen on this release. This is a very atmospheric and melodic black metal album that mixes a variety of genres within it.

The album begins with some shoegazing as the opening track ‘No Blizzard’ begins. This leads up to the metal sound as the drums and guitars come in followed by the blackened vocals. The track is around 6 minutes long and brings in further instrumentation throughout to keep the listener interested. The next song ‘Once Aglow’ is the highlight with its bone crushing opening followed by the epic, blazing synth lines that take the track soaring to another level. The song has such a frenetic energy to it that it never feels like seven minutes have just went by. ‘Det Siste Snofallet’ is just as heavy as the previous track. The guitars have more prominence than previous tracks with various solo and rhythm sections featured throughout. After a frantic opening three tracks the title track slows the album down briefly with a slower acoustic opening. The pace and energy soon pick up again as the song opens up and brings the album to an end.

The Prowress of Dormition is a beautiful album, which is breathtaking to listen to. It is heavy frenetic, but at the same time very melodic and uplifting and gets things off to an exciting start on the new label.