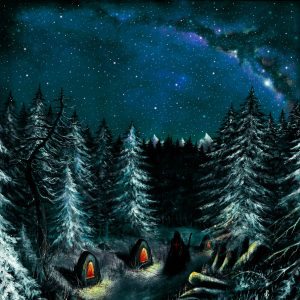 Released on February 1, 2016 via Neuropa Records

Fuath is the latest solo project by Andy Marshall of Saor. While Saor is epic black metal with folk elements the intention for Fuath was to create a more melancholic and darker album. While different in style I retains plenty of the atmosphere that Saor is known for. Marshall cited that he was influence by early 90’s Burzum and Darkthrone alongside more modern bands like Vemod and wanted to create an album that captured those influences.

The opening song of I is ‘In the Halls of the Hunter’, which begins with a quick drum roll to get things started. It is around ten minutes long like the other three songs on the album. The song is repetitive, but it sprinkles in some vocals and added melody at different occasions to ensure boredom does not set in. ‘Blood’ is similar to ‘In the Halls of the Hunter’ in structure and style, but again does enough to ensure the album does not start to drag and overstay any welcome.

The next song ‘Oracle’ is less restrained than the previous tracks and opens out a little towards the end with a nice rhythm section. The final song is again similar to the previous tracks, but different enough to keep the listener interested. It also features a nice breakdown that separates it from the other tracks.

Overall I is a dark brooding album that is very atmospheric and is perfect for those walks in the cold weather of winter. While repetitive at times it is never boring and will keep you listening to the very end.