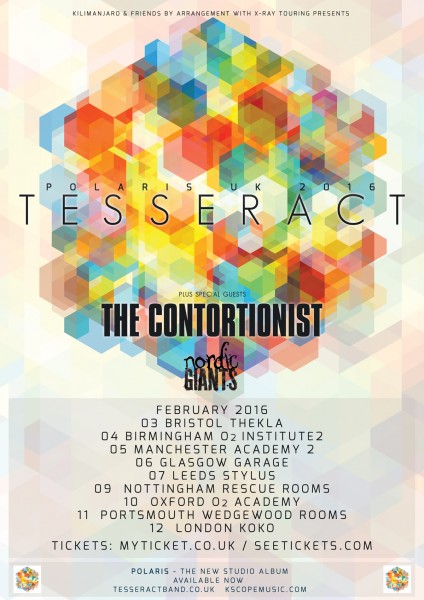 Wednesday evening’s concert at the O2 Academy in Oxford was one of rarities. Not only is it all too infrequent to see bands of TesseracT’s calibre disturb the slumber of this city of dreaming spires, it is rarer to find an entire evening of performances as satisfying impressive as those witnessed by this evening’s audience (an audience that appeared more like rabbits caught in headlights than a rowdy metal crowd, ignoring the token mosh-pit-starting few who’d probably instigate a wall of death at next month’s Justin Bieber Appreciation Society gig, although frankly that I’d appreciate).

The other ways this evening was rare are that a) it began with a support act who, upon finishing their performance, made me seriously question whether the headliners were going to be able to top it (spoiler: they did), and b) the support act was as strange and unique as they come. Post-rock witch doctors Nordic Giants presented their highly cinematic set to a spell-bound audience that will be having flashbacks for months to come. Nordic Giants consists of only two members, both of whom wear the masks and outfits of feathery shamans, and play atmospheric soundtracks against a backdrop of original film shorts. Each song has a different accompanying film, ranging from dystopian sci-fi to hand-drawn animation, with the music meticulously meshing to coincide with the films’ events. The performance of the music was as visually striking as the films, with the drummer occasionally taking up the duty of guitarist, unconventionally foregoing a plectrum for a bow,  and the keyboardist playing a trumpet with all the pomposity it deserves. The pair’s witch doctor-like appearance seems highly appropriate as I can’t help but feel that we, the audience, were witness to a 30-minute long group hallucination with all the transcendental qualities of a religious experience. We were their tribe and they our ayahuasca. I may not have seen God but I’ve certainly witnessed one of the most refreshing pieces of rock-cum-performance art I’m likely to for a very long time.

Less transcendental but no less accomplished were The Contortionist, a progressive metal sextet from Indiana who bear more than a passing resemblance to Periphery and tour-fellows TesseracT. The band have been going since 2007, a fact un-betrayed by their fresh-faced and somewhat nerdy appearance. And so what: this is nerdy music; what they lack in stage presence they make up for with nourishing brain fodder, sounding like an amalgamation of Dream Theatre’s progressive noodling and Deftones’s floaty ambiance. Largely playing music from 2014’s Language, The Contortionist revealed a very well-rounded sound that is backed up by adept playing and astute musicality. Although, their somewhat vague musical meandering seemed to procrastinate and afraid to diverge from their moderato tempo marking. Those brief and thrashy moments when they did up their tempo exposed a layer of aggression and excitement I felt was missing for the majority of their set. It seems like it’s the vocals that need to lead the charge with The Contortionist’s music, but as a result of lacklustre vocal mixing and a similarly uninspiring performance, the music went flat. Genre-cohorts Animals as Leaders avoid this by removing the position of vocalist entirely, relying solely on the instrumentation to keep things interesting and I wonder whether The Contortionist, particularly whilst listening to their purely instrumental moments, would benefit with a more engaging listen by doing the same.

It was Nordic Giants who opened the evening, but it was closed by giants in all but name. Djent-pioneers TesseracT exuded polish and class, the oil in an incredibly well engineered machine, and put on a performance that was simply breathtaking. Bands often struggle to match their recordings, which have been refined over time, but live, TesseracT managed to surpass themselves and make me understand their music in a new way. While it is the music that ultimately occupies the bottom line, TesseracT showed a number of elements that amalgamated into a brilliant live performance. The first of those is stage presence. It helps that TesseracT are literally giants, towering with their instruments on stage, and handy when you’re trying to span a 7-string guitar . They also move and flow with the music, as if it were coursing through them. In what resembled a choreographed dance, Daniel Tompkins possessed the stage like a natural frontman and I’ll say this while I have the chance: I’m so glad he’s back in TesseracT. Tompkins leads the line masterfully with vocals that soar on the upper registers without a stutter and there’s a smooth timbre to his voice that is inherently pleasurable to listen to, interestingly accented with harsh vocals and moments of rapped staccato.

The second element that contributed to the overall display was the lighting, which at a rock gig is normally strobed and disorienting. During TesseracT’s performance, the lighting reflected the mood of the music; diffracted back lighting illuminated moments of atmospheric pause and top lights flashed in time with the odd time signatures. It’s a small thing, sure, but performances like this are all about spectacle. The other band member worth mentioning by name is bass player Amos Williams. TesseracT leave room for the bass to live on its own shelf, allowing it to have a constant, noticeable presence, contributing greatly to the music’s highly rhythmic sound. Williams moved from wandering finger picked passages that did so much more than follow the root notes, to frequent, chunky slap bass, resulting in the unusual situation where the bass was the instrument that often caught the ear and the eye.

The mixing of the instruments was a triumph overall, with the drums sitting pleasingly in the background rather than dominating as they did with The Contortionist. TesseracT’s compositions are grand in scale and the counterpoint between heavy, chugged djent riffs that drive the music forwards with softer, melodic vocals that float on their own plane, means that they avoid that dreaded mid-register many bands lose themselves in, creating a wide tonal palette that pendulously rocks back and forth. While by no means underground, TesseracT nonetheless come across as a band far larger than they are, and it makes me feel all the more privileged to see them in a venue as compact as this one. If TesseracT persist in putting on performances like this, their position in the progressive pecking order will continue to grow, as too will the venues they manage to sell-out.