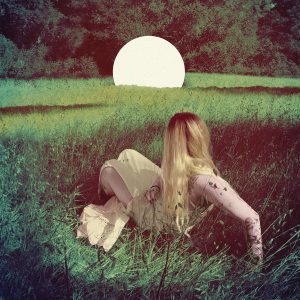 Seattle has a rich vein of history when it comes to power trios. In fact it can be rather smug with itself. For years there was a “Seattle sound”, and when a band were said to have that sound, you would know EXACTLY what to expect. Not anymore. Serial Hawk hail from Seattle, Washington and are a three piece that play a style of music that, yes, can be considered doom (reference 2012’s Buried in the Grey EP), but the way that this set of songs have been crafted goes far beyond that. To my ear there are now elements of progressive music in the mix, moments of post-rock (the minor key downbeat stuff, not the ten a penny light on its feet side of the genre) and moments of psych that all seep through the dense, primitive riffs. So saying that Serial Hawk are a doom band does them a huge disservice.

The musicianship on Searching for Light is great, the rhythm section play in such a dynamic way, never over playing, very understated but integral to these four songs. The vocals are used sparingly which I like, not that the vocals are bad, they are wonderful, bellowed like Will Bassin has been possessed by King Buzzo himself. Sparse guitar passages give way to slow, lurching riffs, the kind of riffs that make a bang over increasingly likely if ever I get the privilege to see, and from what I’ve heard feel these songs live. Serial Hawk have the perfect balance between light and dark on this record.

Album opener ‘Desolate’ kicks things off with bass and drums that remind me more of Southern Lord darlings Baptists than of (insert doom band here). After a minute or so, guitar creeps into the background before wiping everything out with a huge riff and with the riff enter THOSE vocals. I like that the band don’t always keep things super slow, the majority of ‘Desolate’ is mid-tempo, always driving and doesn’t relent of a second. There is a breakdown in the middle that wouldn’t be out of place on the last Neurosis record, big percussive toms and bass distortion that give way to the main riff again before the song is deconstructed into more Neurosis worship, which, let’s face it, isn’t a bad thing.

‘Lying in Wait’ is the shortest song here clocking in at just under 4 minutes. It feels like more of an interlude piece given that the other songs in this set are considerably longer. That being said there is isn’t a moment to breathe. It starts with snare rolls, and high end guitar work that lead into an unsettling, low spoken vocal. The guitar and bass are so tight that it is hard to differentiate between the two. The riff is played on a constant throughout, broken up only by what the drums are doing. The only real way I can describe how it makes me feel is if Swans played metal.

Before I heard this album I read “For Fans of Yob and Om” and I was very confused on my first listen through because I just didn’t get that. That was until I listened again to ‘Of Decay’. The song opens with another driving riff, big drums and bass distortion, but after a couple of minutes delves so seamlessly into a passage of calm, with overdriven bass played underneath clean chords with the drums leading the piece. Then the riff re-enters. The clean chords give way to thick walls of tone, the bass rumbles into life and the drums sound like you are being shot at. The riff changes form, it changes tempo and the song finally lurches into its final resting place after 7 minutes. Incredible.

Title track and album closer, ‘Searching for Light’, is remarkable. It opens with ringing guitar chords played over ambient soundscapes, then the rhythm section attack with almost military precision. It has just dawned on me that until now I haven’t mentioned bassist Adam Holbrook, sorry man. How he plays and what he plays gives Will Bassin’s guitar playing so much more freedom. Holbrook plays in a pretty similar way to Bulkley, in that he never overplays, his contribution to this set of songs is solid, undeniable and very dynamic. This song I think helps to sum the album up in that there are a few different things happening in the one piece. Bassin’s low, spoken vocal is buried under walls of guitar drone and thundering toms and a bassline that keeps everything rolling perfectly. The spoken vocal turns into throaty roar and with it the volume increases and the song veers into unsettling territory with a fraught lead guitar passage that adds to the intensity and keeps everything building. The unsettling side of Serial Hawk is great, it isn’t over used or relied on too heavily here, but they do it very well. Out of the dark enters a shimmering passage that brings the song down to a quiet creaked bass riff. Then a few seconds of silence before Bassin, Bulkey and Holbrook unleash hell. Bassin commands “Follow me now to the end of all time!” over slabs of thick guitar and an unrelenting, almost tribal rhythm section. It is trancelike. After a couple of minutes the song is again deconstructed and crawls to a halt with the hum of guitar amps, room ambience and Holbrook’s sparse bass work.

This record really does deserve your time. I almost feel bad for the band having to write a follow up.

For Fans Of: Samothrace, Kylesa, Neurosis and Helms Alee.