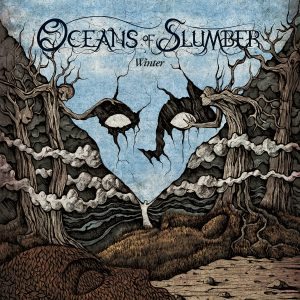 Ever since they dropped their astonishing cover of ‘Solitude’ by Candlemass back in February 2015 to promote both their Blue EP and especially a new vocalist, Texan outfit Oceans of Slumber found themselves with an expectant new fan base hungry to hear more (that and the involvement of Insect Warfare drummer Dobber Beverley probably helps…).

So a year later and full length second album Winter finally arrives. Now if – like myself admittedly – you have come for more of “The Doom!” you may be disappointed as there is very little of that here, (although if you have been paying attention to their recent videos you may have twigged that), but it is definitely worth sticking around as there is plenty to enjoy.

Instead Oceans of Slumber plough an intricate progressive metal sound not too dissimilar to Opeth with the heavier metallic elements channelling Mastodon (especially with the growled backing vocals) performed with distinction not only by the excellent musical proficiency of the band, but for what really sets them apart from the pack, the powerful clean range of the afore mentioned ‘new’ vocalist Cammie Gilbert gliding over proceedings.

Opening salvo of ‘Winter’ and ‘Devout’ are a perfect demonstration of the band at their best, the former starting with gentle melodic guitar work and clean vocals into which the rest of the band ease themselves into the fray as the progressive meandering morphs into metallic power chords and back again with even a gratuitous guitar solo is thrown into the mix for good measure. Underpinning all of this is the dynamic rattling drumming providing an interesting contrast, while ’Devout’ showcases the heavier side of the band as they play with far more aggressive intent and a sense of urgency.

An unexpected (unless you’ve read the track listing) yet sublime cover of the Moody Blues classic ‘Nights in White Satin’ rolls in, and is pretty faithful to the original for the most part except for the transition into blazing crescendos that are especially a highlight.

With a couple of exceptions the rest of the album experiences a disappointing drop in quality, first as Cammie is provided a solo performance in ‘Lullaby’ that is criminally underdeveloped for the brief time it exists and is followed up the first of a several redundant and unnecessarily long interludes that appear. These are coupled with songs such as ‘Sunlight’ that really fail to get out of first gear…

…thankfully there are still gems to be found in the rough with tracks such as ‘Suffer The Last Bridge’ adding much needed up-tempo energy to the bands trademark style and ‘Apologue’, which is easily the most aggressive track on the album as it embarks on a voyage of full throttle death metal with even splash of the symphonic at one point.

‘…This Road’ is certainly an interesting piece as it begins with just a piano and clean vocals that builds into an orchestral passage, which promises something, epic but is then oddly quickly abandoned as the song goes back to the default setting however they do redeem themselves with an impressive post-metal inspired segment. The piano does make one more appearance though as a bombastic solo piece that plays the band out on grand finale ‘Grace’.