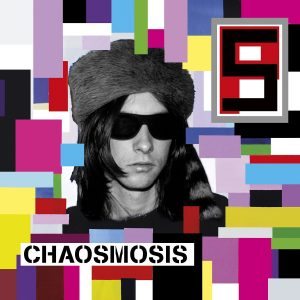 Released on March 18, 2016 via Ignition Records

For a band that likes to start an album with a bang, ”Trippin’ on Your Love’ is an explosion of heavy guitar riffs, hammond organ and Screamadelica-era beats. The melody is rich and worms into your head quickly. Bobby Gillespie is on typically droll form, sounding as though he and Innes’s guitar are made for each other. And let’s be honest, any album that starts with Gillespie shouting ‘COME ON’ into a mic is onto something. Chaosmosis (kinda clumsy rock & roll portmanteau? Check!) marks Primal Scream’s 11th studio album over a lengthy decades-spanning career that has seen them flit genres, gain and lose members, and release one of the defining albums of the 1990s. The album is released on the band’s First International label, through Ignition Records.

Following the mix of rock and electronica that has led the band through their last few albums, there’s nevertheless more energy about Chaosmosis, than say Evil Heat or More Light. ‘Feeling Like a Demon Again’ could fit on EXTRMNTR – its beat veers into Krautrock-psychedelia – though granted it lacks the power and vitriol of that album. The vocal is trippy as Gillespie sings about medication killing the pain, the lyrics quite possibly another paean to drugs dressed up as a love song. “I don’t want you, I don’t need you anymore.” As the song progresses and the titular refrain rolls and retracts like a gentle tide, it becomes more emotional. It’s not the only track that revisits this millennial sound of the band – ‘When the Blackout Meets the Fallout’ has a familiar punk-techno sound to it.

‘I Can Change’ brings in elements of dub, Gillespie almost swooning his way through the verses. And then a flute appears – which despite the kaleidoscopic rhythm, still comes as a surprise.
‘100% of nothing”s deep beat explodes into the most recognisably rock and roll track, with 4/4 bass led drums, gospel backing vocals. Its the first track that veers from the musical themes established, evoking something approaching Depeche Mode. It’s one of a couple dips in standard, joined by the casio-beat of ‘Carnival of Fools’.

There’s a 60s lilt to the acoustic folk of ‘Private Wars’, Gillespie’s voice being trailed throughout by a gentle female accompaniment. No drums, no beats, just a sweet melody and some strings backing the guitar. *’You’ve been inside yourself too long…’*

The disco is back on ‘Where the Light Gets In’, a duet between Gillespie and Sky Ferreira, which is the lead single from the album. We’re into New Order territory on the chorus here. Even the line ‘The world is a place where the light gets in,’ sounds like something from the Bernard Sumner School of Rock. That’s what really stands out throughout the album; there’s a load of different influences that wouldn’t immediately be labelled to this band, and they’re introduced while still sounding unmistakably like the Scream. There aren’t many bands who have managed to be so relevant for so long. Since Screamadelica in 1991 the band has proved that it is happy to take leaps, look forward, look back, look for anything that is going to make their output better. That has led to different sounds across different albums, and here on Chaosmosis.

At their best, Primal Scream can throw electronrica, dance and rock together like no one else and any current exponents of this genre-mix, likely picked up their path from listening to Primal Scream. The blues undercurrent that has defined much of Primal Scream’s work is present, overlaid with rock. Tracks like ‘Golden Rope’, infused with sitar and industrial drums, could come from no other band – it’s even got ‘Hallelujahs’ in it, as tired a rock cliche as that is. But just as you frown at that it surprises: half way through it changes tempo, direction, *’I know that there is something wrong with me*,’ repeats Gillespie, teeing the listener up for album closer ‘Autumn in Paradise’, a track with a title so indulgently Spinal Tap-esque that it is almost weighed down by its own expectations. It doesn’t disappoint though – steering us back in an electronic direction, glimmering guitars reminding us of the band’s shoegazing past.

Possibly their best album since XTRMNTR, this is a statement that a band who’ve been on the go for 30 years can still produce something new. No one’s going to say it’s the best thing Primal Scream have ever done, but it’s not half bad.